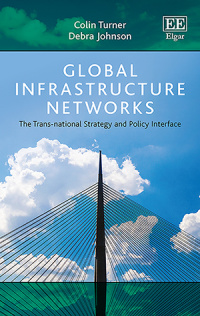 9780857934406 Edward Elgar Publishing
Colin Turner, Institute for Infrastructure, Heriot-Watt University and Debra Johnson, formerly Hull University Business School, UK
Publication Date: 2017 ISBN: 978 0 85793 440 6 Extent: 256 pp
Infrastructure represents the core underpinning architecture of the global economic system. Adopting an approach informed by realism, this insightful book looks at the forces for the integration and fragmentation of the global infrastructure system. The authors undertake a thorough examination of the main internationalised infrastructure sectors: energy, transport and information. They argue that the global infrastructure system is a network of national systems and that state strategies exert powerful forces upon the form and function of this system.

More Information
Critical Acclaim
Contents
More Information
Taking a realist approach, this insightful book looks at the forces shaping the evolution of global infrastructure networks. As the international economy globalises, there is an emergent need for national systems to adapt and integrate to form a global system.

The authors expose the move to interconnect state infrastructures as a strategy to support and enhance states’ territoriality. Examined through the lens of economic infrastructure (including transport, energy and information) this book addresses the forces of integration and fragmentation in the development of global networks. The significant impact of globalisation on infrastructure adaptation is especially highlighted, as well as the key limitations hindering development.

Global Infrastructure Networks will be of great interest to academics and graduate students of geography, political economy and public policy. International policy makers will also find this a compelling read, as it identifies the benefits and limitations of upcoming developments in global infrastructure.

Critical Acclaim
‘Globalisation depends on the physical and digital connectivity that infrastructure systems provide, and it is powered by global energy networks. Yet globalisation is also transforming the nature of infrastructure, for example, establishing it as a financial asset class and reviving its colonial role as an instrument of power. Turner and Johnson look through the lens of political economy to untangle the complex processes of infrastructure development that are shaping societies, economies and landscapes worldwide.’
– Jim Hall, University of Oxford, UK

‘This book can be considered as “the next level” in the analysis of global infrastructure networks. The term ‘infrastructure’ is used here to mean a wide range of technical, economic and political arrangements, including daily commuting systems, container shipping networks, airline networks, and energy networks. Collectively these infrastructures support the flows of people, ideas, knowledge, capital, goods, etc. that facilitate the (re)production of cities as strategic places in the economy. The guiding principle in this book is that (global) cities are not only prominently connected in infrastructure networks, but above all combine the advantages of assuming central positions in these networks to support the global work that is routinely done within and between these cities. A stimulating read for all interested in how global infrastructure networks perform such functions as control, integration, security, and growth.’
– Frank Witlox, Ghent University, Belgium