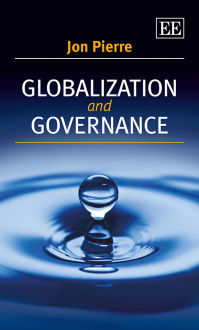 The empirical analysis is focused on economic governance, administrative reform and intergovernmental relationships. Drawing on survey data, documents and interviews, the analysis finds that domestic institutions still intrinsically shape domestic governance. International norms towards deregulation and market-based administrative reform confront domestic institutions with prescriptions for reform but the three countries provide only very few examples of unmitigated domestic implementation. What Jon Pierre calls ‘the microfoundations of globalization’—the assessment, adoption or rejection of international norms and ideas in vogue—is a complex process where domestic institutions and path dependencies remain at the helm. The most important exception to this pattern is governance during financial crises where countries are dependent on conditioned support from transnational institutions.

This insightful and informative book will appeal to researchers, academics, post-graduate, as well as undergraduate, students in governance, political economy and international relations.
Critical Acclaim
‘To pun, Pierre brings globalization down to earth. After all the hype, he serves as an experienced and trustworthy guide to the key question of how far nation states are “forced” to follow global trends. His answers are nuanced, well-evidenced, and thought-provoking. This should find a place on many reading lists.’
– Christopher Pollitt, Katholieke Universiteit Leuven, Belgium

‘Jon Pierre’s Globalization and Governance takes on perhaps the most significant question in international political economy: to what extent have nations governance structures been determined and shaped by the recent great forces of globalization? In an ingenious analytical tour de force, he looks at how three very different democracies, Japan, Sweden, and the U.S., have dealt with the economy, intergovernmental relationships, and administrative reform when confronted by globalization trends. His conclusion is a masterful, elegant and convincing argument that boils down to “somewhat, but not as much as you (or many other theorists) might think”. This is an important, sophisticated and ground-breaking book about the interstices of international and domestic policymaking and political economy that challenges the conventional wisdom. Is there any better kind in the study of governance?’
– Ellis Krauss, University of California, US

‘Globalization and Governance makes a compelling case that domestic political economies can cope creatively, distinctly, and effectively with exogenous pressures for change. However compelling and homogenizing global forces may appear to be, the book shows that Sweden, Japan and the United States continue to demonstrate an overwhelming resilience by entrenched domestic patterns plus powerful learning and adaptive capabilities. This book is a welcome addition to the ongoing debates about globalization; it is full of insights for specialists in both comparative politics and international relations.’
– T.J. Pempel, University of California, Berkeley, US
Contents
Contents: 1. Globalization and the State 2. Globalization and Domestic Governance 3. Still Governing the Economy? Economic Governance 4. Cities and Regions in a Globalized World: Inter-Governmental Relationships 5. Modernizing the State: Administrative Reform 6. Conclusions: Domestic Governance in a Globalizing World References Index
Add to Wish List