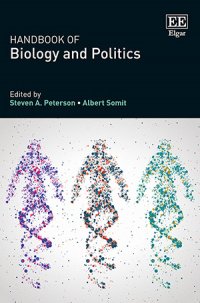 Handbook of Biology and Politics

9781783476268 Edward Elgar Publishing
Edited by Steven A. Peterson, Professor of Politics and Public Affairs, Penn State Harrisburg and the late Albert Somit, formerly Distinguished Professor Emeritus, Southern Illinois University, Carbondale, US
Publication Date: 2017 ISBN: 978 1 78347 626 8 Extent: 560 pp
The study of biology and politics (or biopolitics) has gained considerable currency in recent years, as articles on the subject have appeared in mainstream journals and books on the subject have been well received. The literature has increased greatly since the 1960s and 1970s, when this specialization first made an appearance. This volume assesses the contributions of biology to political science. Chapters focus on general biological approaches to politics, biopolitical contributions to mainstream areas within political science, and linkages between biology and public policy. The volume provides readers with a comprehensive introduction to the subject.

More Information
Critical Acclaim
Contributors
Contents
More Information
Moving away from the long-established paradigm which holds that all political behavior is learned via socialization, this Handbook assesses the contributions of biology to political science, illustrating that behavior is in actual fact shaped by the interplay between learning and biological influences.

Describing how a more biologically-oriented approach expands and enriches political science, both conceptually and in terms of its research capabilities, key chapters focus on general biological approaches to politics, biopolitical contributions to mainstream areas within political science, and linkages between biology and public policy. Providing specific examples of how Neo-Darwinism can contribute to more successful public policies, the Handbook further emphasizes the close ties between a realistic understanding of human political behavior and the likelihood that our species successfully resolves the problems that now threaten its welfare.

Original and thought-provoking, this Handbook will prove an enriching read for political scientists starting to consider the value of biological factors in influencing political behavior, as well as for behavioural scientists in other areas experiencing the same paradigm shifts. Biologists will also find further grounding for their research into biological and behavioral science.

Critical Acclaim
‘Stalwart biopolitics scholars Steven A. Peterson and Albert Somit continue their long-running contributions to the cause, this time by assembling, in a single jam-packed volume, dozens of timely, insightful, thought-provoking contributions from an A-list of researchers in this exciting, inter-disciplinary subfield.’
– John Hibbing, University of Nebraska–Lincoln, US

‘Slowly but surely the social sciences are starting to realize that Charles Darwin’s theory of evolution through natural selection comes as a friend and supporter rather than as a foe and conqueror. This splendid collection, Handbook of Biology and Politics, edited by Steven A. Peterson and Albert Somit, shows that work in this field is rapidly moving towards maturity. At a time when, with reason, politics and its practitioners are judged and found sadly wanting, such a volume as this, looking at human nature in its fullest dimension and applying it to an understanding of the problems of society – reinvigorating the original project of Aristotle – is as provocatively stimulating as it is badly needed.’
– Michael Ruse, Florida State University, US
Contributors
Contributors: K.Blanchard, Jr., R.H. Blank, D. Boisvert, E. Bucy, K. Butts, P.A. Corning, D. Couvet, A. Fletcher, B.J. Foster, J.M. Friend, A. Friesen, O. Funke, A. Ksiazkiewicz, M. Latner, V. Lemm, L. Liesen, J. Losco, R.D. Masters, A. Mazur, G.R. Murray, W.J. Patzelt, M.B. Petersen, S.A. Peterson, A. Somit, R.H. Sprinkle, P.A. Stewart, B.A. Thayer, J. Vaske, M. Vatter, R.F. White, T.E. Wohlers
Contents
Contents:

Part I: Introduction
1. What Is Biopolitics?
Steven A. Peterson and Albert Somit

2. The Organizational Structure of Biology in Politics
Robert Hunt Sprinkle

3. Believers and Disbelievers in Evolution and Climate Change
Allan Mazur

12. Research Methodology in Biopolitics
Albert Somit and Steven A. Peterson

17. Media Biopolitics: The Emergence of a Subfield
Erik P. Bucy

23. The Science of Human Nature and the Social Contract: A Biological Frame for Public Policy
Peter A. Corning

25. The Ties That Bind: Policy Implications of Evolutionary and Developmental Perspectives on Women and Their Children’s Reproductive Strategies
Laurette T. Liesen

28. From Biodiversity to Policies to Politics
Denis Couvet