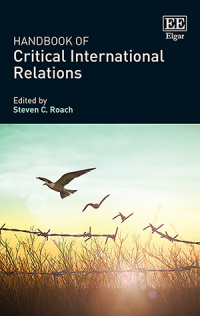 9781788112888 Edward Elgar Publishing
Edited by Steven C. Roach, Professor of International Relations, the School of Interdisciplinary Global Studies, University of South Florida, US
Publication Date: 2020 ISBN: 978 1 78811 288 8 Extent: 384 pp
Comprising a plurality of perspectives, this timely Handbook is an essential resource for understanding past and current challenges to democracy, justice, social and gender equality, identity and freedom. It shows how critical international relations (IR) theory functions as a broad-based and diverse critique of society.

More Information
Critical Acclaim
Contributors
Contents
More Information
Comprising a plurality of perspectives, this timely Handbook is an essential resource for understanding past and current challenges to democracy, justice, social and gender equality, identity and freedom. It shows how critical international relations (IR) theory functions as a broad-based and diverse critique of society. The chapters explore key new areas of research, including critical emotion and critical animal studies and draws on Marxist, poststructuralist, feminist, realist and post-colonial backgrounds to frame this research.

Structured in four thematic parts, the Handbook of Critical International Relations moves from discussing approaches and emancipation, concepts and configuration, and political economy and domination, to global trajectories and challenges. Its emphasis on non-Western IR viewpoints, offers cutting-edge insights into the notion of otherness, the dialectics of authoritarian neoliberalism, and agonistic recognition.

Graduate and undergraduate IR scholars will benefit from the solid, working understanding of critical IR offered in the detailed chapters on the varied approaches, concepts and new areas of research in the field. Critical IR research institutions and policy-makers will also appreciate the discussion of, and advice offered on, key issues and challenges facing democracy and justice.

Critical Acclaim
‘As a broad disciplinary descriptor, critical international relations says both too much and too little. That said, Roach and his collaborators have performed a great service. This is a strong collection of synoptic chapters, treating key developments in the field with seriousness and erudition. Readers seeking entry into a complex, contested literature, or seeking to broaden or update their intellectual horizons, will find it invaluable.’
– Daniel J. Levine, The University of Alabama, US

'Critical theory is under siege from challenges to its alleged Eurocentrism and from national-populist movements to any notion of global emancipation. How should critical theory deal with those assaults and what form should future versions take? This volume reconsiders critical, emancipatory thought in the context of radical political change and concerns about the future of international cooperation. All students of critical theory will profit from engaging with its wide-ranging and scholarly reflections on a leading perspective in international relations over the last four decades.'
– Andrew Linklater, Aberystwyth University, UK