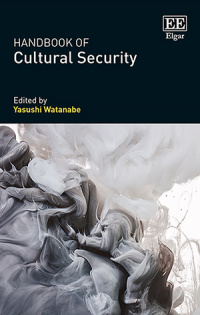 9781786437730 Edward Elgar Publishing
Edited by Yasushi Watanabe, Graduate School of Media and Governance, Keio University, Japan
Publication Date: 2018 ISBN: 978 1 78643 773 0 Extent: 512 pp
This Handbook aims to heighten our awareness of the unique and delicate interplay between ‘Culture’ and ‘Society’ in the age of globalization. With particular emphasis on the role of culture in the field of “non-traditional” security, and seeking to define what ‘being secure’ means in different contexts, this Handbook explores the emerging concept of cultural security, providing a platform for future debates in both academic and policy fields.

More Information
Critical Acclaim
Contributors
Contents
More Information
How are cultural identities, values and traditions challenged, appropriated and negotiated? What does ‘being secure’ mean? Is ‘soft power’ merely a continuation of imperialism? The Handbook of Cultural Security heightens our awareness of the interplay between ‘culture’ and ‘society’ in the age of globalization, and explores the emerging concept of cultural security.

With chapters from leading experts providing case studies from across the world this timely and unique Handbook examines the relationship between society, culture, and security in a globalizing world. Providing a diverse examination of the topic, the contributors emphasize the role of ‘non traditional’ security and seek to define what ‘being secure’ means across a broad number of contexts. Chapters cover topics ranging from the politics of radical Islam, the global spread of gated communities, and cultures of security and surveillance to discussions of the concept of soft power; the forms it takes, and the impacts of ‘exporting’ culture.

This Handbook provides a platform for future debate in both academic and policy fields, and as such will be of interest for both students of public and social policy, international relations, and politics, as well as those engaged in shaping policy in these areas.
Critical Acclaim
‘With a refreshingly original theoretical framework of “cultural security,” Professor Watanabe offers a collection of 24 chapters by eminent scholars from all over the world. Taking up urgent contemporary issues, each article deliberates upon the question of cultural security in the global era as “super modern” with competing soft powers or the global era as “postmodern” when culture serves as the “safety net” of one’s identity. It is a splendid contribution to academia as well as to the general public.’
– Emiko Ohnuki-Tierney, University of Wisconsin, US
Contributors
Contributors: A. Åkerlund, A.H. Anderson, A. Anisman, A. Azra, B.K. Blitz, E. Brogi, C. Ceniza Choy, A. Clarke, M.E. Eken, P. Gielen, J.L. Graves Jr., J. Guetzkow, F. Hartig, C.B. Huat, F. Izadi, J.C. Lai, G. Lee, A. Manguvo, O. McIvor, T. Monahan, M. Nyanungo, J. Pamment, A. Pande, S. Pandey, P.L. Parcu, A. Richter, J. Ruan, H. Saghaye-Biria, E. Sevin, S.J. Son, G. Sun, Y. Watanabe, C. Webster, M. Wieviorka, A. Wojciuk

PART I CULTURE AND HUMAN SECURITY
1. Cultural insecurity in a world of violence, fear and risk
Michel Wieviorka

3. Neo-racism in the age of genomics
Joseph L. Graves Jr

11. The image of the smart city: surveillance protocols and social inequality
Torin Monahan

15. The role of the state in cultural diplomacy
James Pamment and Andreas Åkerlund

23. Pluralism and freedom of the media: a European perspective
Elda Brogi and Pier Luigi Parcu