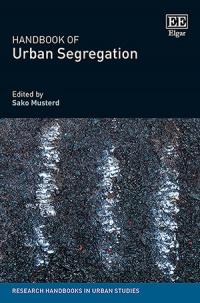 9781788115599 Edward Elgar Publishing
Research Handbooks in Urban Studies series
Edited by Sako Musterd, Emeritus Professor of Urban Geography, University of Amsterdam, the Netherlands
Publication Date: 2020 ISBN: 978 1 78811 559 9 Extent: 456 pp
The Handbook of Urban Segregation scrutinises key debates on spatial inequality in cities across the globe. It engages with multiple domains, including residential places, public spaces and the field of education. In addition it tackles crucial group-dimensions across race, class and culture as well as age groups, the urban rich, middle class, and gentrified households. This timely Handbook provides a key contribution to understanding what urban segregation is about, why it has developed, what its consequences are and how it is measured, conceptualised and framed.

More Information
Critical Acclaim
Contributors
Contents
More Information
The Handbook of Urban Segregation scrutinises key debates on spatial inequality in cities across the globe. It engages with multiple domains, including residential places, public spaces and the field of education. In addition, this comprehensive Handbook tackles crucial group dimensions across race, class and culture as well as age groups, the urban rich, and middle-class and gentrified households.

In a ‘world tour’ of urban contexts, the reader is guided through six continents confronting pressing segregation issues. Leading international scholars offer valuable insights across regional, ethnic, socioeconomic and welfare regime contexts. Three thematic parts explore key segregation questions worldwide, the multiple domains and dimensions of the topic, and the methods, approaches and debates surrounding its measurement. Through these lenses, this timely Handbook provides a key contribution to understanding what urban segregation is about, why it has developed, what its consequences are and how it is measured, conceptualised and framed.

Containing clear use of visual aids alongside textual analysis, this Handbook will be an engaging and accessible resource for students and scholars with an interest in urban and human geography, cities and planning, and the wider field of urban studies.

Critical Acclaim
‘Musterd and contributors do an excellent job of exposing us to recent global segregation research. The Handbook is a good resource for academics and policymakers and can be used in courses in city planning, urban sociology or urban geography.’
– David Varady, Journal of Housing and the Built Environment

‘Sako Musterd has brought together an extraordinary group of distinguished scholars from across the world to produce a cross-national, interdisciplinary study of urban segregation. As well as providing a wealth of empirical data and methodological approaches to the study of segregation, the book makes important contributions to the analysis of globalization, neoliberalism, gentrification, and the decline of the welfare state. Yet, while attributing much to these general processes, it also distinguishes the varying effects of particular local and national policies.’
– Susan S. Fainstein, Harvard Graduate School of Design, US

‘This book presents new points of departure for debates about segregation. Its chapters provide original, cross-disciplinary, research-based accounts using different frameworks to build on earlier work. They explore economic, policy and other factors that drive changing patterns of urban segregation in different cities and countries, and analyse how the various dimensions of segregation are overlapping and reinforcing. The book provides new insights and a new baseline that make it essential reading for anyone concerned with urban research and policy.’
– Alan Murie, University of Birmingham, UK

‘Social segregation is a wide-ranging and important phenomenon within cities across the world. The implications are profound in terms of social interaction as well as access to employment, housing, education, health, transport and open space. This valuable edited collection examines the variations in segregation in a variety of different cities and contexts and will be an important source for staff and students.’
– Chris Hamnett, King's College London, UK and UESTC, Chengdu, China

PART I KEY SEGREGATION ISSUES ACROSS THE GLOBE: URBAN
SEGREGATION IN CITIES IN AFRICA, SOUTH AMERICA,
ASIA, AUSTRALIA, EUROPE AND NORTH AMERICA
2 Urban segregation in South Africa: the evolution of exclusion in Cape
Town 19
Jacobus van Rooyen and Charlotte Lemanski
3 Segregation by class and race in S.o Paulo 36
Eduardo Marques and Danilo Fran.a
4 Residential segregation of rural migrants in post-reform urban China 55
Zhigang Li and Feicui Gou
5 Dimensions of urban segregation at the end of the Australian dream 76
Bill Randolph
6 Globalization, immigration and ethnic diversity: the exceptional case of
Vienna 101
Josef Kohlbacher and Ursula Reeger
7 Do market forces reduce segregation? The controversies of post-socialist
urban regions of Central and Eastern Europe 118
Zolt.n Kov.cs
8 Urban and school segregation in the larger Paris metropolitan area: a
complex interweaving with a strong qualitative impact on social cohesion 134
Marco Oberti
9 Racial and economic segregation in the US: overlapping and reinforcing
dimensions 151
Paul A. Jargowsky

PART II MULTIPLE DOMAINS AND DIMENSIONS OF SEGREGATION
10 Can the public space be a counterweight to social segregation? 170
Ali Madanipour
11 Spatial segregation and the quality of the local environment in contemporary
cities 185
Roberta Cucca
12 Intersections of class, ethnicity and age: social segregation of children in the
metropolitan region of Amsterdam 200
Willem R. Boterman
13 Change and persistence in the third dimension: residential segregation by age
and family type in Stockholm, 1990 and 2014 219
.sa Br.m. and Roger Andersson
14 Segregation by household composition and income across multiple spatial
scales 239
Ann Owens
15 Middle-class family encounters and the role of micro-publics for cross-social
interaction 254
Heike Hanh.rster and Sabine Weck
16 Socioeconomic segregation and the middle classes in Paris, Rio de Janeiro
and S.o Paulo: a comparative perspective 270
Edmond Pr.teceille and Adalberto Cardoso
17 Segregation and the urban rich: enclaves, networks and mobilities 289
Rowland Atkinson and Hang Kei Ho
18 The impact of gentrification on social and ethnic segregation 306
Wouter van Gent and Cody Hochstenbach
19 Vertical social differentiation as segregation in spatial proximity 325
Thomas Maloutas
20 Residential stratification and segmentation in the hyper-vertical city 346
Ray Forrest, Ka Sik Tong and Weijia Wang

PART III MEASURING AND CONCEPTUALISING SEGREGATION:
METHODS, APPROACHES AND DEBATES
21 Understanding the processes of changing segregation 367
Nick Bailey
22 Integrating infrastructure and accessibility in measures of bespoke
neighbourhoods 378
John .sth and Umut Türk
23 On the meaning and measurement of the ghetto as a form of segregation 395
Alan Walks
EPILOGUE
24 Towards further understanding of urban segregation 411
Sako Musterd

A Research Agenda for Urban Tourism

The Violence of Conservation in Africa

The Politicisation of Social Europe