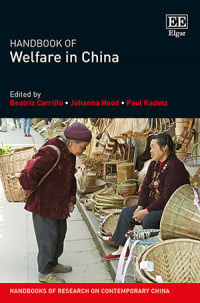 9781783472734 Edward Elgar Publishing
Handbooks of Research on Contemporary China series
Edited by Beatriz Carrillo, University of Sydney, Australia and Xi’an Jiaotong-Liverpool University, China, Johanna Hood, Roskilde University, Denmark and Paul Kadetz, Drew University, US and University College London, UK
Publication Date: 2017 ISBN: 978 1 78347 273 4 Extent: 464 pp
The Handbook is a timely compilation dedicated to exploring a rare diversity of perspectives and content on the development, successes, reforms and challenges within China’s contemporary welfare system. It showcases an extensive introduction and 20 original chapters by leading and emerging area specialists who explore a century of welfare provision from the Nationalist era, up to and concentrating on economic reform and marketisation (1978 to the present). Organised around five key concerns (social security and welfare; emerging issues and actors; gaps; future challenges) chapters draw on original case-based research from diverse disciplines and perspectives, engage existing literature and further key debates.

More Information
Critical Acclaim
Contributors
Contents
More Information
This Handbook is a timely compilation dedicated to exploring a rare diversity of perspectives and content on the development, successes, reforms and challenges within China’s contemporary welfare system. It showcases an extensive introduction and 20 original chapters by leading and emerging area specialists who explore a century of welfare provision from the Nationalist era, up to and concentrating on economic reform and marketisation (1978 to the present).

Critical Acclaim
‘The Handbook of Welfare in China is a good example of a handbook. The text finds the balance between the contributors’ detailed knowledge and the editors’ efforts to produce coherent contribution. It is a publication entering what will be an increasingly competitive market with a number of edited volumes covering welfare in China from a research perspective already out, and a number of handbooks planned for the future which either touch on or are exclusively focused on welfare. Despite this competition I would suggest that the Handbook of Welfare in China will successfully find a space on many reading lists and a place in any good library.’
– The China Quarterly

‘In this book, Carrillo, Hood and Kadetz have assembled a distinguished cast of academics to examine social welfare in China. The result is a sweeping review that covers Chinese welfare through various historical eras, across differing models of welfare provision and from a range of perspectives. Evolving aspects of welfare provision by the central state, by local states, by employers, by NGOs, by individual philanthropists and by families are all considered. The authors also make useful comparisons across historical divides and between China and other countries, including both developed economies in Europe and other developing countries. While the authors diverge in terms of their degree of optimism or pessimism towards Chinese welfare regimes, they all manage to illuminate aspects of its provision. The book will become a starting point for all interested in this topic.’
– Andrew Kipnis, The Australian National University
Contributors
Contributors: E. Baum, M. Blaxland, O. Bruun, B. Carrillo, J. Chen, S. Cook, X.-y. Dong, T.D. DuBois, K.R. Fisher, M.W. Frazier, R. Hasmath, T. Hesketh, J. Hood, J.Y.J. Hsu, E. Jeffreys, H. Jia, P.I. Kadetz, B. Li, Y. Li, J. Liu, S.-h. Liu, Y. Liu, A.W. MacDonald, A. Saich, X. Shang, D.J. Solinger, K. Suda, Y. Zeng, J. Zhao, Z. Zhao