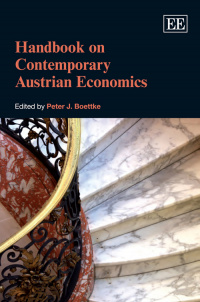 9781847204110 Edward Elgar Publishing
Edited by Peter J. Boettke, University Professor of Economics and Philosophy, George Mason University, US
Publication Date: 2010 ISBN: 978 1 84720 411 0 Extent: 192 pp
This Handbook looks through the lens of the latest generation of scholars at the main propositions believed by so-called ‘Austrians’. Each contributing author addresses key tenets of the school of thought, and outlines its ongoing contribution to economics and to the social sciences.

More Information
Contributors
Contents
More Information
The Austrian school of economics was founded in 1871 with the publication of Carl Menger’s Principles of Economics. In his book, Menger argued that economic analysis is universally applicable and that the appropriate unit of analysis is man and his choices. These choices, he wrote, are determined by individual subjective preferences and the margin on which decisions are made. The logic of choice, he believed, is the essential building block to the development of a universally valid economic theory. The home of the field moved first to Britain and then on to the US, and at present a diverse mix of intellectual traditions in economic science is obvious in contemporary Austrian school economists. While one could argue that a unique Austrian school of economics operates within the economic profession today, one could also sensibly argue that the label ‘Austrian’ no longer possesses any substantive meaning.

PART I: THE SCIENCE OF ECONOMICS
1. Only Individuals Choose
Anthony J. Evans

2. Economics as the Study of Coordination and Exchange
Christopher J. Coyne

3. The Facts of the Social Sciences are what People Believe and Think
Virgil Henry Storr

6. Without Private Property, There Can Be No Rational Economic Calculation
Scott A. Beaulier

7. The Competitive Market is a Process of Entrepreneurial Discovery
Frederic Sautet

PART IV: CONCLUSION
11. Back to the Future: Austrian Economics in the Twenty-first Century
Peter J. Boettke

A Handbook of Economic Anthropology