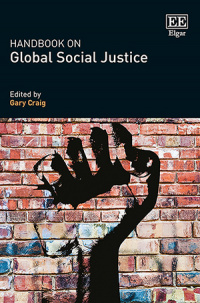 9781786431417 Edward Elgar Publishing
Edited by Gary Craig, Professor of Social Justice and Visiting Professor, Law School, University of Newcastle upon Tyne, UK
Publication Date: 2018 ISBN: 978 1 78643 141 7 Extent: 528 pp
In the fifty years since Rawls’ seminal work A Theory of Justice, the concept has been debated with those on the political right and left advocating very different understandings. This unique global collection, written by a group of international experts, offers wide-ranging analyses of the meaning of social justice that challenge the ability of the market to provide social justice for all. The Handbook also looks at how the theory of social justice informs practice within a range of occupations or welfare divisions.

More Information
Critical Acclaim
Contributors
Contents
More Information
Since the publication of Rawls’ seminal work, A Theory of Justice, in the second half of the twentieth century, the concept has been constantly debated, with those on the political right and left advocating very different understandings. This unique global collection, written by an exceptional group of international experts, offers a wide-ranging analysis which challenges claims that the market can provide social justice for all.

Comprehensive in both its geographical and thematic coverage, authors link theory to policy and practice. Sections cover how to think strategically about social justice in relation to national perspectives; equality and human rights; and applications of the concept to a range of welfare divisions and professional practices. Reflecting both historical and contemporary debates on the subject, the Handbook provides a strong political focus, as well as widening the view of social justice beyond narrow perspectives on welfare provision.

This Handbook will be an excellent tool for students at a postgraduate level in the social sciences, particularly social policy, sociology, politics and philosophy. Established researchers of political and sociological theory, and practitioners and policy-makers in professional areas of welfare provision, will also find the extensive insights into current research exceptionally useful for enhancing and developing their work, and situating it within a clear political and philosophical context.
Critical Acclaim
‘The Handbook on Global Social Justice offers an impressive coverage of the many issues that underpin the concept of social justice and stimulate debates around it. The editor, Gary Craig, provides a solid introduction to how the book interprets social justice, making clear the need to “reclaim” the concept as a progressive one, bringing it back to its philosophical roots, situating its content within the critical jurisprudential analyses of Rawls, Kant and Mill, alongside theological understandings from Christianity to Hinduism, an awareness of the need to understand the intersections of race, disability, gender, sexuality and age, and its meaning within nations beyond the UK.’
– Gráinne McKeever, Journal of Social Security Law

‘This wide-ranging Handbook demonstrates how the concept of social justice provides a valuable lens for the analysis of diverse contemporary policy and political issues. Drawing on a number of disciplines and theoretical perspectives, it puts theory to the service of policy and practice.’
– Professor the Baroness Ruth Lister of Burtersett, Loughborough University, UK

1. Introduction the the Handbook on Global Social Justice
Gary Craig

8. Social justice in Australia: Ending the over-representation of Indigenous children in out-of-home care and returning them to their communities
Philip Mendes

9. France: Social justice and perceptions of inequalities - a democratisation of an oligarchic ethos
Patrick Savidan

19. Saving social justice and environmental justice in an age of tyranny and corruption
Miriam Kennet

22. Migration and social justice: parity of participation for asylum-seekers in the UK?
Jenny Phillimore

29. Civil society and the values of social justice
Gary Craig

31. An exploration of love in the time of inequality: philanthropy an social justice
Nicolette Naylor and Halima Mahomed