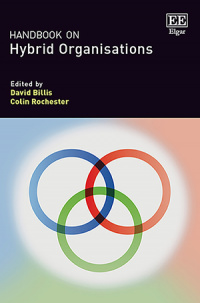 9781785366109 Edward Elgar Publishing
Edited by David Billis, Emeritus Reader, London School of Economics and Colin Rochester, Honorary Research Fellow, University of Kent, UK
Publication Date: 2020 ISBN: 978 1 78536 610 9 Extent: 576 pp
Hybrid Organisations – that integrate competing organisational principles – have become a preferred means of tackling the complexity of today's societal problems. One familiar set of examples are organisations that combine significant features from market, public and third sector organisations. Many different groundbreaking approaches to hybridity are contained in this Handbook, which brings together a collection of empirical studies from an international body of scholars. The chapters analyse and theorise the position of hybrid organisations and have important implications for theory, practice and policy in a context of proliferating hybrid forms of organisation.

Pioneering and thorough, this Handbook is vital reading for scholars and students of public and social administration, organisational theory, business and management studies and the third sector. Policymakers and organisation leaders responding to the development of hybrid forms will also benefit from its unique insight into the new environment for hybrid organisations.

Critical Acclaim
‘The blurring of sectoral boundaries and the explosion of new organisational forms and arrangements is an increasingly dominant feature of contemporary economic, political and social life. In this Handbook, editors David Billis and Colin Rochester have successfully embraced and advanced the field of hybridity in organisations. Contributing authors capture both the advantages of hybridity in solving complex problems and overcoming boundary constraints, and the challenges posed by competing logics and accountability structures. The Handbook contains numerous insightful case studies as well as the rudiments of an entirely new theory of hybrid organisations. This is a major advance in organisational and policy studies.’
– Dennis R. Young, Georgia State University and Case Western Reserve University, US

‘This inspiring book brings together work by leading academics and practitioners to explore the complex world of hybrid organisations in an authoritative, comprehensive and highly original overview of this important new topic. In assembling these cutting edge contributions, the editors bring together public, private and third sector perspectives on hybridity for the first time. This Handbook is a must-read for anyone interested in the changing nature of organisational life where the third sector is going, and opens up important new pathways for research and action.’
– David Lewis, London School of Economics and Political Science, UK