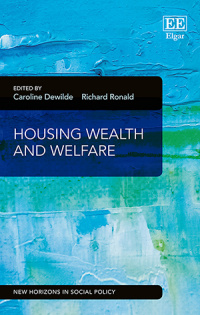 9781785360954 Edward Elgar Publishing
New Horizons in Social Policy series
Edited by Caroline Dewilde, Department of Sociology, Tilburg University and Richard Ronald, Centre for Urban Studies, University of Amsterdam, the Netherlands
Publication Date: 2017 ISBN: 978 1 78536 095 4 Extent: 288 pp
Both growth and unevenness in the distribution of housing wealth have become characteristic of advanced societies in recent decades. Housing Wealth and Welfare examines, in various contexts, how housing property ownership has become central both to household wellbeing and to the reshaping of social, economic and political relations.

More Information
Critical Acclaim
Contributors
Contents
More Information
Both growth and unevenness in the distribution of housing wealth have become characteristic of advanced societies in recent decades. Housing Wealth and Welfare examines, in various contexts, how housing property ownership has become central both to household wellbeing and to the reshaping of social, economic and political relations.

Expert contributors analyse the critical interactions between housing and wealth that lie at the heart of contemporary forms of capitalism, especially its global, neoliberal incarnation. Comparing and contrasting case studies from across the European continent, this book illustrates how these interactions are reshaping the function of housing as a welfare object, including how the commodification and financialisation of housing in the twenty-first-century has transformed its role and amplified distributional outcomes.

Practical and engaging, Housing Wealth and Welfare will be of interest to researchers and students of housing studies, social policy, sociology, social geography and political science. It will also appeal to policy makers and practitioners with both local and international perspectives.
Critical Acclaim
‘Housing Wealth and Welfare makes a timely and important contribution to our understanding of home ownership’s role in shaping contemporary welfare states.’
– Gavin Wood, RMIT University, Australia

‘Home ownership has always been connected to both welfare and wealth, but the ties have been strengthened in the aftermath of the global financial crisis. Now, the editors and authors of Housing Wealth and Welfare discuss the current state of affairs. They sketch different scenarios for different countries and cohorts but never lose touch of the general trends. Required reading for anyone interested in the various faces of home ownership.’
– Manuel B. Aalbers, KU Leuven, Belgium

‘This is a very interesting edited volume comprising an introduction chapter reflecting on so-called housing asset-based welfare and nine chapters written by a nice selection of authors. . . I recommend scholars in the fields of social policy, political science, sociology, and geography to thoroughly study this book which provides a very good state of the art of housing asset-based welfare and an interesting collection of chapters explaining how housing, social policy, and financial markets interact.'
– International Journal of Housing Policy

1. Why housing wealth and welfare?
Richard Ronald and Caroline Dewilde

PART I OLD AND NEW CONCEPTUALIZATIONS OF HOUSING AND WELFARE
2. The rise and fall of Ireland’s property based welfare state: Home ownership rates, policies and meanings in a historical perspective
Michelle Norris

4. Housing wealth and welfare over the life course
Stephan Köppe and Beverley A. Searle

PART II INSTITUTIONAL VARIEGATIONS OF THE RELATIONSHIP BETWEEN HOUSING, WELFARE PROVISION AND INEQUALITY
6. Financial resilience and security: The impacts of the housing market downturn on low-income home owners in Northern Ireland
Alison Wallace

7. Trends in social inequalities regarding home ownership: A comparison of East and West Germany
Kathrin Kolb and Sandra Buchholz

8. Home ownership in post-socialist countries – The negative impact of the transition period on old-age welfare
Srna Mandič and Maja Mrzel