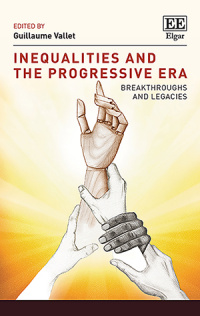 9781788972642 Edward Elgar Publishing
Edited by Guillaume Vallet, Associate Professor, Université Grenoble Alpes and Research Fellow, Centre de Recherche en Economie de Grenoble (CREG), France
Publication Date: 2020 ISBN: 978 1 78897 264 2 Extent: 360 pp
Inequalities and the Progressive Era features contributors from all corners of the world, each exploring a different type of inequality during the ‘Progressive Era’ (1890s-1930s). Though this era is most associated with the United States, it corresponds to a historical period in which profound changes and progress are realized or expected all over the globe.

More Information
Critical Acclaim
Contributors
Contents
More Information
Inequalities and the Progressive Era features contributors from all corners of the world, each exploring a different type of inequality during the Progressive Era (1890s-1930s). Though this era is most associated with the United States, it corresponds to a historical period in which profound changes and progress are realized or expected all over the globe.

The original and international perspectives of the book make it possible to examine important issues or authors of the Progressive Era, who have at times been neglected or insufficiently discussed. This analysis allows us both to know more about this key period of the history of capitalism, and to consider contemporary debates regarding the treatment of inequalities with a pluralistic approach.

Academics and students of all levels, from PhD and Master degree students to undergrads will appreciate the original focus on the roots and treatments of inequalities, and this innovative collaboration between researchers of various fields in social sciences.

Critical Acclaim
‘This collection of essays is a valuable reference for anyone interested in inequality. Its wide breadth, both in terms of topics and geographical coverage, and the sociological and institutional perspective that permeates most of the contributions, provide insights often lacking in other works on the same topic.’
– Emanuele Citera, Review of Political Economy

‘The collection itself is fascinating in the scope of the material. Many of those identified here as Progressives are absent from the orthodox treatments of the subject, which has been for the most part confined to a specific period in the economic and social history of the United States.’
– Charles R McCann Jr, History of Economic Ideas

‘Rising inequality in late 19th and early 20th centuries US led to the development between 1920 and 1980 of the most successful and ambitious progressive tax system ever experimented. If you want to know more about the intellectual roots of the progressive era, you should read this great collection of essays. A fascinating book.’
– Thomas Piketty, Ecole des Hautes Etudes en Sciences Sociales and Paris School of Economics, France

I. Foundations of inequalities
1. The question of inequalities during the Progressive Era in the United States: The “Golden Mean” program of the economist Richard T. Ely
Michel Rocca

11. Land ownership as a mechanism for the reproduction of inequality in Ecuador from 1895 to 1920s
Francisca Granda

12. Peasants, inequality and progress in the research of Alexander Chayanov: Russia and the world
Vladimir Babashkin and Alexander Nikulin

17. A reconsideration of James Africanus Beale Horton of Sierra Leone (1835–1883) and his legacy
Odile Goerg

20. Trailblazing feminists at the turn of the twentieth century: A focus on Marianne Weber and Lou-Andreas Salomé
Christine Castelain-Meunier