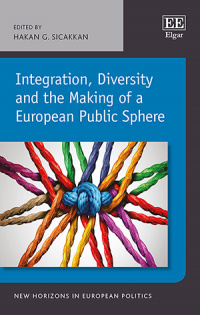 Integration, Diversity and the Making of a European Public Sphere

9781785360909 Edward Elgar Publishing
New Horizons in European Politics series
Edited by Hakan G. Sicakkan, Associate Professor, Department of Comparative Politics, University of Bergen, Norway
Publication Date: 2016 ISBN: 978 1 78536 090 9 Extent: 272 pp
Based on an extended agonistic pluralism perspective, this book offers a novel notion of a transnational public sphere that goes beyond the questions of whether a European public sphere exists or is possible and instead provides a solid understanding of its key features.

More Information
Critical Acclaim
Contributors
Contents
More Information
Based on an extended agonistic pluralism perspective, this book offers a novel notion of a transnational public sphere that goes beyond the questions of whether a European public sphere exists or is possible and instead provides a solid understanding of its key features.

This book offers an alternative concept of European integration based on the idea of integrative and constitutive conflicts. Not only an exploration of the emerging European public sphere, this groundbreaking book also evaluates the outcomes of the EU policies aiming to create it, as well as the trans-European networks’ efforts to become a pan-European civil society. Expert contributors explore the European public sphere’s contribution to democracy and present enhanced empirical knowledge of the role of supranational institutions and pan-European networks in facilitating European integration, thus challenging the liberal intergovernmentalist, neo-functionalist and multi-level governance approaches.

Integration, Diversity and the Making of a European Public Sphere will be of interest to scholars and upper level students of European studies, politics and public policy. Global, regional and national civil society organizations, think tanks and media corporations will also find value in this book.
Critical Acclaim
‘The book is well balanced within normative and empirical chapters. . . . the chapters that form the volume are from scholars who come from different disciplines such as media and communications, political science, sociology, and cultural studies – an astute expertise that makes the book easy to read and enjoyable. I find the book an advancement in the research of the emergence of the European public sphere. The book presents outstanding research about the current state of the European public sphere, with the latest study available on the matter. The book should be read by anyone seeking to understand the current state of the concepts of a public sphere in Europe, and the European public sphere.’
– Javier Ruiz-Soler, Mass Communication and Society

‘Integration, Diversity and the Making of a European Public​ ​Sphere, makes an important argument for adapting a new theoretical framework from an extended agonistic pluralism perspective of the public sphere for understanding the complex and contesting relationships​ ​in the making of the European public sphere. . . . Overall, the book provides a rich and important source not only for those who​ ​are interested in​ ​understanding the European public sphere and its components, but also those​ ​who work on other types of​ ​transnational public spheres in other regions.’
– Cigdem Bozdağ, International Journal of Communication​

‘Integration, diversity, and the European public sphere are not just concepts put together in this outstanding book – these are the most burning issues of our time. In the light of the global financial crisis, the crisis of the Eurozone, the refugee crisis and, most recently, the British exit from the European Union, observers might think that crises are the best indicators of the rise of a European public sphere. However, this thought-provoking collection of studies, edited by Hakan G. Sicakkan, offers a much deeper investigation of dimensions of the problem of a European public sphere. This book is an eye opener, and should be read by all who are interested in the future of the European idea.’
– András Bozóki, Central European University, Hungary
Contributors
Contributors: W. Dressler, D.N. Duru, M. Klicperova-Baker, J. Kostal, M. Mokre, M. Perez, R. Sata, H.G. Sicakkan, H.-J. Trenz, J.H. van de Beek, F. Vermeulen

5. Diversity in the Virtual Sphere: Social Media as a Platform for Transnational Encounters
Deniz Neriman Duru and Hans-Jörg Trenz

6. The Contribution of Think Tanks to the Formation of a European Public Sphere
Marybel Perez

9. Toward Empirical Assessment of the European Demos and Public Sphere: Comparing Democratic Value Orientations of Citizens and Elites
Martina Klicperová-Baker and Jaroslav Košťál

10. The Role of EU Policies in the Making of the European Public Sphere
Hakan G. Sicakkan