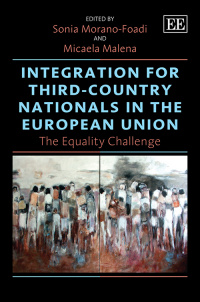 Integration for Third-Country Nationals in the European Union

More Information
Critical Acclaim
Contributors
Contents
More Information
This highly original book provides an innovative analysis of EU migration and asylum law and its interplay with equality issues in order to assess the current integration framework for third-country nationals and to explore future scenarios in the European Context.

Integration for Third-Country Nationals in the European Union focuses on the nexus between non-discrimination based on nationality and race, and the equality clauses covering different categories of regularly residing third-country nationals within EU law. It highlights the extent to which social rights that have been formally promised to non-EU citizens are enjoyed in practice. The contributing authors – who are both academics and practitioners – also consider the link between secure residence and equal treatment, highlighting on the implementation of EU Policies in aselection of Member States. Using socio-legal and comparative methods, this study provides an overview of the models of integration and social cohesion shaped by European and national actors in order to profile the present fragmented structure of European society and to discuss future possibilities.

Academics, practitioners, and students interested in EU law and migration studies will find this enriching book invaluable.
Critical Acclaim
‘. . . an excellent research tool for academics and practitioners alike, as well as journalists of course and indeed anyone making serious enquiries into migration and refugee issues.’
– Phillip Taylor MBE and Elizabeth Taylor, The Barrister Magazine

Introduction: Integration for Third-Country Nationals in the EU – the Challenge of Equality
Sonia Morano-Foadi

PART I: FRAMEWORK CHAPTERS
1. The Evolution of the Concept of Union Citizenship after the Lisbon Treaty
Elspeth Guild

2. The Equality Clauses in the EU Directives on Non-discrimination and Migration/Asylum
Sonia Morano-Foadi and Karin de Vries

PART II-1: ASYLUM-SEEKERS AND REFUGEES: CASE STUDIES ON THE UK, ITALY AND GREECE
4. Inequality for Asylum-Seekers and People Entitled to Protection in the European Union
Madeline V. Garlick

7. Equal Before the Law? The Case of Asylum Procedures and Detention of Asylum-Seekers in Greece
Evangelia (Lilian) Tsourdi

9. Care, Labour and Migration Policies in Germany: Implications for the Rights of Migrant Domestic and Care Workers
Maria Kontos

11. The EU Researcher Directive and its Implementation in German Immigration Law
Kay Hailbronner

13. Access to Employment and Occupation in Belgium, Germany and the United Kingdom
Moritz Jesse

PART III-3: FAMILY MEMBERS: CASE STUDIES ON GERMANY, THE NETHERLANDS AND SPAIN
14. Inequalities of Family Members of EEA and non-EEA Nationals: ‘Integration’ and Barriers to Family Reunification in the Post-Lisbon Era
Keith Puttick and Cordelia Carlitz

15. Language Skills as a Requirement for Family Reunification of Spouses in Germany: Respecting Respect for Family Life?
Cordelia Carlitz

16. The Dutch Act on Integration Abroad: A Case of Racial or Ethnic Discrimination?
Karin de Vries

17. The Adaptation of Spanish Law on Family Reunification to International and European Law
Carmen Pérez González