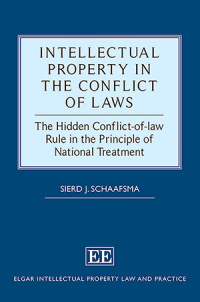 9781839108495 Edward Elgar Publishing
Elgar Intellectual Property Law and Practice series
Sierd J. Schaafsma, Justice of the Supreme Court of the Netherlands
Publication Date: January 2022 ISBN: 978 1 83910 849 5 Extent: c 544 pp
This comprehensive book provides a ground-breaking new explanation of the principle of national treatment in the Berne Convention and the Paris Convention and new insights into the history of the conflict-of-laws, alien law and their relationship. Providing a full and detailed analysis of the existence and the interpretation of the conflict-of-law rule in these conventions, this book will be an important resource for legal scholars, specialized practitioners and policy-makers.

More Information
More Information
The world of intellectual property (patents, trade marks, copyrights, et cetera) is becoming increasingly international. More and more frequently, disputes about intellectual property have an international character. This inevitably raises questions of private international law: which national court is competent to adjudicate an international dispute of this kind? And which national law should be applied to an international case of this kind? Since the 1990s, the first question in particular has attracted attention; in recent years, the focus has shifted to the second question: which national law is applicable? Opinions differ widely on this matter today. The controversy focuses on the question whether the Berne Convention and the Paris Convention, the two most important treaties on intellectual property, contain a rule that designates the applicable law. In other words: do these treaties contain a 'conflict-of-law rule' as it is called? This question, which concerns nearly all countries in the world, is nowadays considered to be ‘heftig umstritten’ (fiercely contested) and ‘très difficile’ (very difficult). And that is where we come across something strange: today it may be fiercely contested whether these treaties contain a conflict-of-law rule, but in the past, for the nineteenth-century authors of these treaties, it was perfectly self-evident that these treaties contained a conflict-of-law rule, namely in the ‘principle of national treatment’ as it is called. How is that possible? These are the fundamental questions at the heart of this book: does the principle of national treatment in the Berne Convention and the Paris Convention contain a conflict-of-law rule? And if so, why do we no longer understand this conflict-of-law rule today?

This book is an English translation of Sierd J. Schaafsma’s ground-breaking book, which appeared in Dutch in 2009 (now updated, see Foreword).

• detailed and authoritative explanation of the applicable law at the intersection of the law of conflicts and intellectual property law.

The Future of Copyright in the Age of Artificial Intelligence