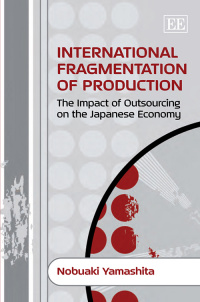 The Impact of Outsourcing on the Japanese Economy

The impact of the ongoing process of international fragmentation of production and outsourcing has become a highly contentious issue in developed economies such as the US and Japan. Concerns about deindustrialisation and large-scale job losses – ‘the export of jobs’ have generated a political backlash against multinationals and globalisation. Using detailed data from Japanese multinationals this book rigorously analyses the Japanese experience and compares and contrasts it with the experience of US manufacturing. The study finds no empirical evidence that expansion of multinational activities in foreign countries produces job losses in the home country. Indeed, when demand induced indirect employment effects are taken into account the increased profitability of Japanese firms is likely to have increased overall employment in Japan. However, the shift of labour intensive activities to low wage economies associated with the international fragmentation of production generates adjustment pressures and a structural shift in favour of skilled workers in Japanese manufacturing.

‘Japanese firms are major players in East Asian production supply chains, by outsourcing labour-intensive parts of the production process to nearby low-wage economies (production fragmentation). This excellent empirical study first uses new databases to contrast fragmentation trade pattern and labour market adjustment between Japanese and US firms. It finds that outsourcing leads to increases in the skill of Japanese manufacturing workers and, more importantly, that it did not hurt overall Japanese employment and possibly even helped. This is an important contribution to our understanding of East Asian regional production networks and Japan’s trade patterns.’
– Hugh Patrick, Columbia Business School, US
Contents
Contents: Preface 1. Introduction 2. International Fragmentation of Production: A Survey of Theory and the Measurement Issue 3. Production Fragmentation and Trade Patterns in Japanese Manufacturing 4. Determinants of Fragmentation Trade 5. Structural Transformation and Labour Market Adjustment in Japanese Manufacturing 6. The Impact of Production Fragmentation on Skill Upgrading 7. Overseas Operations and Home Employment of Japanese Multinational Enterprises 8. Conclusion References Index
Add to Wish List