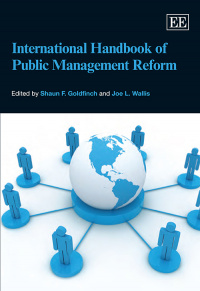 Through a careful cross-country analysis spanning the last three decades this timely volume critically evaluates whether countries are converging towards a single public management model. The book goes on to investigate unresolved issues surrounding leadership, e-government, accountability and computer systems failure currently facing reformers. Shaun Goldfinch and Joe Wallis have brought together a number of eminent scholars from across Europe, Asia, North America and Australasia to explore the role of economic ideas, human resources and the state of public management reform in twelve countries.

3. HRM in the Public Sector: Is It Enough?
Marie-France Waxin and Robert Bateman

4. New Public Management and the Politics of Accountability
Robert Gregory

6. ‘E-Government’: Is it the Next Big Public Sector Trend?
Robin Gauld

8. Public Management Reform in the United Kingdom: Great Leaps, Small Steps and Policies as Their Own Cause
Kai Wegrich

11. The Challenge of Renewing Governance in Canada
Stephen Tomblin

12. The United States: The Political Context of Administrative Reform
Bert A. Rockman and Thierno Thiam

15. Dynamic Conservatism: The Rise and Evolution of Public Management Reforms in the Netherlands
Mirko Noordegraaf

16. Danish Public Management Reform Before and After NPM
Jørgen Christensen

17. Public Management Reform in Norway: Reluctance and Tensions
Tom Christensen and Per Lægreid

20. Conclusion: Is There a Common Thread?
Joe L. Wallis