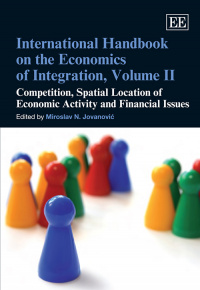 International Handbook on the Economics of Integration, Volume II

International Handbook on the Economics of Integration, Volume II covers three broad themes: competition, spatial location of economic activity and financial issues. With 20 chapters written by 34 eminent authors, this comprehensive Handbook begins by examining competition and industrial policies from a European perspective. It goes on to discuss the geography of production looking at the spatial (locational) effects of economic integration from various theoretical, regional and practical angles. The third and final part of the Handbook analyses monetary issues linked with economic integration at both the European and global level, as well as fiscal matters dealing with tax competition, taxation puzzles and a review of European experiences.

PART I: COMPETITION AND INDUSTRIAL ISSUES
1. Institutional Competition in the European Union: Causes and Consequences of the Drive to Harmonise
Victoria Curzon Price

10. Economic Integration, Regional Policy and the Location of Industry in a Multiregion Framework
Rikard Forslid

13. The Opening Up of Eastern Europe at 20: Jobs, Skills and Reverse Maquiladoras in Austria and Germany
Dalia Marin

16. Asymmetric Shocks and Monetary Disintegration: The Case of the Eurozone
Franco Praussello