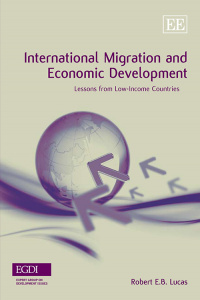 9781848440333 Edward Elgar Publishing
Robert E.B. Lucas, Professor of Economics, Boston University, US
Publication Date: 2008 ISBN: 978 1 84844 033 3 Extent: 384 pp
This accessible and topical book offers invaluable insights to policy makers in both industrialized and developing countries as well as to scholars and researchers of economics, development, international relations and to specialists in migration.

‘This is a highly topical book. Questions of how to combat poverty and promote development in low-income countries are high on the global policy agenda, and so are issues of international migration. Robert E.B. Lucas’ study is one of the first attempts to address the relationship between migration and development in such a broad and ambitious format. The result is impressive – a well-crafted and systematic analysis, rich in empirical detail and conveyed with a great sensitivity to the complexities and controversies faced both by researchers and policymakers. We may expect this work to be a major point of reference for a worldwide debate that has only just started.’
– Jan O. Karlsson former Swedish Minister for Development and Migration and current Co-Chair of an independent Global Commission on International Migration (GCIM) in Geneva
Contents
Contents: Part I: Introduction 1. The Context 2. The Determinants of Migration: Controls, Pressures and Outcomes Part II: Consequences for Economic Development in the Countries of Origin 3. Labor Market Responses to Emigration 4. Emigration of the Highly Skilled: Regimes, Costs and Responses 5. Reported and Informal Remittances: How Much? Who Sends? Who Benefits? 6. The Diaspora and Transnational Networks 7. Repeat and Return Migration: A Habit or ‘There and Back Again’ 8. Poverty, Inequality and the Social Impacts of Migration Part III: Conclusions: Policy Choices and the Political Economy of Migrations Regimes 9. Who Benefits from International Migration? Beyond Economic Development at Origin 10. Migration Regimes and Economic Development: Policy Implications References Index
Add to Wish List
eBook for individuals
978 1 78195 916 9
From £37.56
Click here for options