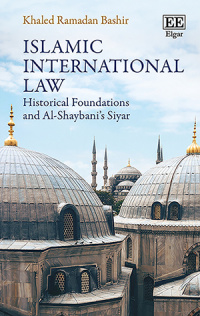 9781788113854 Edward Elgar Publishing
Khaled Ramadan Bashir, The University of Aberdeen, UK
Publication Date: 2018 ISBN: 978 1 78811 385 4 Extent: 320 pp
In this work, Khaled Ramadan Bashir presents and discusses the precise nature of Mohammad Al-Shaybnai’s contribution to Siyar (Islamic International Law). He compares his work to other great contributions on international law made by renowned scholars including Augustine, Gratian, Aquinas, Vitoria and Grotius. Bashir affirms the view that Al-Shaybnai made a major contribution to the field of International law, which was unparalleled until Grotius wrote The Law of War and Peace. To date, Al-Shaybnai’s Siyar is still a cornerstone of the Islamic perspective of international law.

More Information
Critical Acclaim
Contents
More Information
Through the analysis of Al-Shaybani’s most prolific work As-Siyar Al Kabier, this book offers a unique insight into the classic Islamic perspective on international law. Despite being recognised as one of the earliest contributors to the field of international law, there has been little written, in English, on Al-Shaybani’s work. This book will go some way towards filling the lacuna.

This book will be a useful and unique resource for scholars in the field of Islamic International law, bringing together and translating a number of historical sources to form one accessible and coherent text. Scholars researching the historical and jurisprudential origins of public international law topics, such as international humanitarian law, just war, international dispute resolution, asylum and diplomacy will also find the book to be an interesting and valuable text.
Critical Acclaim
‘Bashir makes a major contribution to this field of law, introducing readers to the essential contributions of Al-Shaybani. For anyone interested in a non-European perspective on the history of international law, this book provides an insightful presentation of the large volume of legal doctrine regulating the laws of war and peace in Islamic law.’
– Mona Samadi, Nordic Journal of International Law

‘Khaled Ramadan Bashir is to be commended for shining a light on Shaybani and his place as a pioneer and one of the greatest of scholars of international law. This study breaks the stranglehold of the European origins of international law and forces scholars to engage with the millennium between Antiquity and Discovery by acknowledging the centrality of the Siyar: the study of the Islamic Law of Nations.’
– Jean Allain, Monash University, Australia

‘Positioning himself in the enduring dispute over the nature, legacy and contemporary relevance of Siyar, Khaled Ramadan Bashir aims at enlarging the traditional Western perspective on international law. One does not have to agree in all its particulars to find this book thought-provoking and an important contribution to intercivilizational legal dialogue.’
– Marie-Luisa Frick, University of Innsbruck, Austria

Contents
Contents: 1. Introduction 2. Reading Historical Sources 3. The Law of War 4. Rules on the Consequences of War 5. The Law of Peace 6. Conclusion Bibliography Index