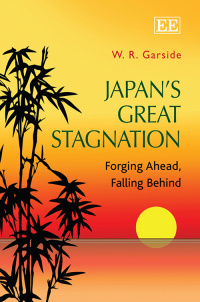 Forging Ahead, Falling Behind

9781783475070 Edward Elgar Publishing
W.R. Garside, Professor of Economics and Economic History, Waseda University, Japan
Publication Date: 2014 ISBN: 978 1 78347 507 0 Extent: 232 pp
This timely book presents a critical examination of the developmental premises of Japan’s high-growth success and its subsequent drift into recession, stagnation and piecemeal reform. The country, which within a few decades of wartime defeat mounted a serious challenge to American hegemony, appeared incapable of fully adjusting to shifting economic circumstance once the impulses of catch-up growth and the good fortune of an accommodating international environment faded.

More Information
Critical Acclaim
Contents
More Information
This timely book presents a critical examination of the developmental premises of Japan’s high-growth success and its subsequent drift into recession, stagnation and piecemeal reform. The country, which within a few decades of wartime defeat mounted a serious challenge to American hegemony, appeared incapable of fully adjusting to shifting economic circumstance once the impulses of catch-up growth and the good fortune of an accommodating international environment faded.

The banking crises, spiralling government debt, and stagnant growth experienced by major industrialized nations in recent years have evoked renewed interest in Japan’s economic denouement since the 1990s. To many, Japan’s drift into recession and financial crisis during the early 1990s, and later into stagnation and prolonged deflation, demonstrated precisely what not to do when fashioning remedial policy. This book details the legacies of Japan’s high-growth success and how they affected Japan’s capacity to cope with shifting national and international circumstance from the 1980s. It reviews the contentious debates over the causes and consequences of the ‘bubble economy’ and the ‘lost decade’, and assesses the extent to which reforms since 1997 have been compromised by lingering attachments to Japan’s distinctive post-war political economy.

Providing an analytical overview of both the high growth and recessionary periods and of subsequent reform agendas, this timely book will appeal to students, academics and researchers of economic history, development and politics, particularly those with an interest in Japan and Asian studies more generally.
Critical Acclaim
‘Recent events have rendered Japan’s lost decades all the more relevant to the rest of us. Rick Garside, in this wide-ranging and accessible account, explores the political economy of Japan’s great stagnation with an eye toward describing how other advanced economies can avoid going down the same path.’
– Barry Eichengreen, University of California, Berkeley, US

‘Professor Garside’s timely book transcends the national preoccupation suggested by its title. From one viewpoint this is a case study (admittedly on a grand scale) of the experience of one country in one historical period. But in analyzing the dynamic relationship between Japan’s post-war economic miracle and its chronic stagnation from the 1990s he offers a penetrating insight into the links between profound and embedded institutional and ideological influences, global upheaval, and almost disastrous national economic performance. Hence, Japan’s Great Stagnation – the unfolding story of that country's declining experience from masterful economic power to seeming economic paralysis – provides us with an all-too familiar scenario with which to approach the contemporaneous ills of the world’s developed economies. The interaction between banking crises, unwieldy institutions (especially, but not only, financial institutions), policy frailties, and stagnating demand – all conspired to create crisis and then handicap or prevent recovery. And the familiarity of the story is aggravated by the global financial crisis which now threatens to engulf us. History never fully repeats itself, but Professor Garside’s illuminating examination of Japan’s recent experiences must surely provide important points of relevance for the world’s current malaise. He is to be congratulated on the depth and scope of what he has achieved – and for its relevance to what we are experiencing.’
– Barry Supple, University of Cambridge, UK

Contents
Contents: Preface 1. Before Stagnation: Legacies of the High-growth Period 2. Catch-up Growth and Maturity: Developmentalism in Retrospect 3. Developmentalism as Ideology 4. Economic and Financial Policy in a Changing International Environment: The Origins and Course of the Bubble Economy 5. ‘Losing a Decade’: Economic and Financial Hubris in Recessionary Japan, 1990–97 6. Funding a Recovery: The Impact and Fate of Fiscal Policy, 1990–97 7. Banking Crises, Monetary Policy and Deflation, 1997–2000 8. Reform Without Salvation: Japan 1997–2000 9. Recession, Stagnation and the Labour Market: Continuity and Change in the 1990s 10. ‘Lost Decades?’ Japan’s Political Economy in the New Millennium Bibliography Index
Add to Wish List
eBook for individuals
978 0 85793 822 0
From £22.36
Click here for options
eBook for library purchase
978 0 85793 822 0
View sample chapter and check access on: