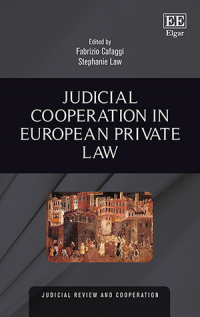 9781786436689 Edward Elgar Publishing
Judicial Review and Cooperation series
Edited by Fabrizio Cafaggi, Professor, Scuola Nazionale dell'Amministrazione, Rome, and Director, Center for Judicial Cooperation, EUI, Florence, Italy and Stephanie Law, University of Southampton, UK
Publication Date: 2017 ISBN: 978 1 78643 668 9 Extent: 288 pp
Notwithstanding recent increases in the scope for judicial cooperation and dialogue between European courts, little research has been undertaken into the impact of the jurisprudence of the European Court of Justice, and the dialogue that arises therefrom, in national legal systems between courts and regulators. This coherent collection of original chapters provides unique insights into these developments – with a particular focus on consumer law – from a broad range of stakeholders, including academics and judges from the EU and the US.

More Information
Critical Acclaim
Contributors
Contents
More Information
Notwithstanding increases in the scope for interaction between European and national courts, little research has been undertaken into the potential impact of institutional cooperation and dialogue in European private law making. This coherent collection of original chapters provides unique insights into these developments – with a particular focus on consumer law, and changes in national civil procedure via substantive law enforcement – from a broad range of stakeholders, including academics and judges from the EU and the US.

Dialogue of both a vertical (between national and European courts) and horizontal (between national courts) nature is visible in the growing number of preliminary references to the CJEU in European private law. Combined with activism on the part of national courts and the growing importance of regulators, this dialogue brings about new forms of development of European private law. This book offers a case-based analysis of these processes, highlighting the need to focus on the instruments of dialogue and cooperation, and pressing beyond the prevailing focus on constitutional dialogue to reveal a new perspective on the private law sphere.

Judicial Cooperation in European Private Law will appeal to scholars, students, practising lawyers and judges interested in the creation and development of European private law at both national and EU levels.

Critical Acclaim
‘This timely collection of essays deals with an important topic: the role of courts in the development of European private law. Not only the European courts – the Court of Justice of the EU and the European Court of Human Rights – but also national courts have a significant influence on the form and substance of rules emerging in this field.’
– Vanessa Mak, Common Market Law Review

‘The EU has adopted a mass of legislation. The challenge is now enforcing the rules effectively and working out the relationships between national and regional courts and administrations. Cafaggi and Law bring together expert academic commentators and senior judicial figures to provide important contributions to these contemporary debates.’
– Geraint Howells, City University of Hong Kong

‘In 2014, the European Commission proposal for an optional European sales law was withdrawn. Meanwhile, the discussion of a European private law has become very successful. The existing acquis has been supplemented by a wealth of case law. This has resulted in an intensive dialogue of national courts, the Court of Justice of the European Union and the European Court of Human Rights. In this book, the recent arrival on the scene of European and national regulators is welcomed and analysed.’
– Ewoud Hondius, University of Utrecht, the Netherlands
Contributors
Contributors: F. Cafaggi, A.C. Ciacchi, F. Gómez Pomar, M. Józon, S. Law, K. Lyczkowska, M. Safjan, A.J. Scirica, C. Timmermans

2. Looking Behind the Scene of Judicial Cooperation in Preliminary Procedures
Christiaan Timmermans

3. Fields of Application of the Charter of Fundamental Rights and Constitutional Dialogues in the European Union
Marak Safjan

4. The Structure of US Federal and State Courts and Mechanisms for Formal and Informal Resolution of Conflicts
Anthony J. Scirica

5. Spanish Courts, the European Court and Consumer Law: Some Thoughts on their Interaction
Fernando Gómez Pomar and Karolina Lyczkowska

7. The CJEU’s Interpretation of the Consumer: What Significance of Judicial Cooperation?
Stephanie Law