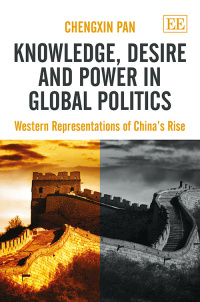 More Information
Critical Acclaim
Contents
More Information
How is the rise of China perceived in the West? Why is it often labelled as ‘threat’ and/or ‘opportunity’? What are the implications of these China imageries for global politics?

Taking up these important questions, this groundbreaking book argues that the dominant Western perceptions of China’s rise tell us less about China and more about Western self-imagination and its desire for certainty. Chengxin Pan expertly illustrates how this desire, masked as China ‘knowledge’, is bound up with the political economy of fears and fantasies, thereby both informing and complicating foreign policy practice in Sino-Western relations. Insofar as this vital relationship is shaped not only by China’s rise, but also by the way we conceptualise its rise, this book makes a compelling case for critical reflection on China watching.

Knowledge, Desire and Power in Global Politics is the first systematic and deconstructive analysis of contemporary Western representation of China’s rise. Setting itself apart from the mainstream empiricist literature, its critical interpretative approach and unconventional and innovative perspective will not only strongly appeal to academics, students and the broader reading public, but also likely spark debate in the field of Chinese international relations.
Critical Acclaim
‘Knowledge, Desire and Power in Global Politics breaks new ground in the China-IR literature. It represents a leading light in the comparatively small but growing body of work which is exposing deep ontological weaknesses in the broad realm of China studies. Chengxin Pan is at the forefront of a push to demonstrate the fallacy in consigning such forces as discourse, identity and representation to the periphery, when they play such a crucial role in the dynamics of China’s global affairs and particularly in its relations with the United States. This book should be required reading for students (most likely final year undergraduates and post graduates) as well as scholars with an appetite to critically evaluate the now somewhat tired debates over what China ‘is’ or will be.’
– Oliver Turner, The University of Manchester, Global Change, Peace & Security, 2014

‘China threat or China opportunity, like beauty, is in the eyes of the beholder. Western imaginations of China come under close scrutiny in this book, in a new, philosophical depth seldom attempted before. Dr Pan displays in full force his analytical skills and his mastery of knowledge, both East and West. Contrary to conventional approaches, he takes a step back to exercise a powerful reflective process to watch the China watchers, with illuminating results. Dr Pan’s book deserves wide and careful reading.’
– Professor Gerald Chan, University of Auckland, New Zealand

‘The rise of China is largely seen as either a threat or an opportunity. Chengxin Pan exposes both of these representations as expressions of Western fears and desires for certainty and predictability. His call for a more reflective and culturally sensitive understanding of China offers an important contribution to one of the big political debates of our time.’
– Professor Roland Bleiker, University of Queensland, Australia

‘This is a brilliant and insightful treatment of Western representations of China, with a theoretical framework suggesting they come not only from China itself, but also the West. Although it is not the first treatment of this topic, it is innovative in considering the “China threat” and “China opportunity”: both aspects of the rise of China are of crucial importance for our times. With provocative conclusions, it is a truly path-breaking contribution to the literature. I recommend it highly!’
– Emeritus Professor Colin Mackerras, Griffith University, Australia

‘Pan has produced a book which not only challenges some basic assumptions about the nature of China’s “rise”, but more importantly forces us to rethink the very basic starting points of how we know what we know about China.’
– Professor Shaun Breslin, University of Warwick, UK

Contents
Contents: Preface 1. Introduction: Knowledge, Desire and Power in Western Representations of China’s Rise 2. Threat and Opportunity: A Bifocal Lens 3. Of Fears and Fantasies: Neocolonial Desire in Western Self/Other Imagination 4. The ‘China Threat’ and the Political Economy of Fear 5. The ‘China Threat’: A Self-fulfilling Prophecy 6. The ‘China Opportunity’: False Promises (and Premises) 7. The International Politics of Disillusionment 8. China Watching: Towards Reflection and Dialogue Bibliography Index
Add to Wish List
eBook for individuals
978 1 78254 424 1
From £22.36
Click here for options
eBook for library purchase
978 1 78254 424 1
View sample chapter and check access on: