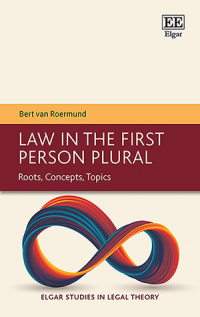 Law in the First Person Plural

More Information
Critical Acclaim
Contents
More Information
The first-person plural – ‘we, ourselves’ – is the hallmark of a democracy under the rule of law in the modern age. Exploring the roots of this ‘rule of recognition’, Bert van Roermund offers an in-depth reading of Rousseau’s work, focusing on its most fundamental leitmotif: the sovereignty of the people.

Providing an innovative understanding of Rousseau’s politico-legal philosophy, this book illustrates the legal significance of plural agency and what it means for a people to act together: What do people share when using the word ‘we’? What makes a people’s actions political? And what exactly is ‘bodily’ about their joint commitment? Testing these ideas in three controversial modern debates – bio-technology, immigrant rights and populism – Van Roermund offers a critical assessment of ‘political theology’ in contemporary legal environments and establishes a new interpretation of joint action as bodily entrenched.

Incisive and cutting-edge, this book is crucial reading for scholars of jurisprudence and legal and political philosophy, particularly those with a focus on Rousseauian theory. Students of jurisprudence and constitutional theory will also benefit from its philosophical and political insights, as well as its discussions of pressing real-world issues.

Critical Acclaim
‘Precision and vitality of thought are often at odds in works of legal philosophy. Never so in the work of Bert van Roermund, whose new book Law in the First Person Plural takes us back to Rousseau, just in time. We are fortunate to be able to think with him about what is popular and what is constitutional or legislative, political or institutional, in the contexts of popular constitutionalism, the EU’s democratic deficit and more.’
– Bonnie Honig, Brown University, US
Contents
Contents: Preface Introduction Part I Roots: Re-Reading Rousseau 1. An Inconvenient Legacy 2. Meeting the Challenges Part II Concepts: We As a Body Politic 3. First Person Plural Legislature 4. Joint Law Making: From Reference to Action 5. A first person plural body? Part III Topics: First Persons Plural in the Flesh 6. The Embryo as First Person Plural Concept in EU Law 7. Migrants, Humans and Human rights: Freedom of Movement in a First Person Plural Key 8. The Half Truth of Contemporary Populism: Keeping a False ‘We’ at Bay Bibliography Index
Add to Wish List
eBook for individuals
978 1 78897 644 2
From £25.00
Click here for options
eBook for library purchase
978 1 78897 644 2
View sample chapter and check access on: