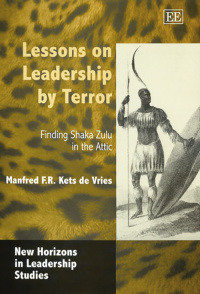 Lessons on Leadership by Terror

Finding Shaka Zulu in the Attic

More Information
Critical Acclaim
Contents
More Information
What makes despotic leaders tick? How do they become despots? On a lesser (but far more common) scale: why are some people ruthlessly abrasive in the workplace? Why do some business leaders appear to lose their sense of humanity? How and why do they create a culture of fear, uncertainty and doubt in their companies?

Lessons on Leadership by Terror attempts to discover what happens to people when they acquire power, and whether the abuse of power is inevitable. Manfred Kets de Vries examines the life of the nineteenth-century Zulu king Shaka Zulu in order to help us understand the psychology of power and terror. During his short reign, Shaka Zulu established one of the most successful regimes based on terror that has ever existed, from which the traits of despotic leaders are illustrated. Shaka’s life history is a study in the psychology of terror, and he can be a proxy for the behavior of any despot, be it from antiquity or modern times. From his leadership behavior fifteen cautionary lessons are derived, offering valuable principles for contemporary leaders.

The book also explores the characteristics of totalitarian states, and discusses what can be done to prevent despotic leaders from coming to the fore. Clear parallels are drawn between Shaka’s behavior and that of other, more contemporary, leaders including Hitler, Stalin, Pol Pot and Saddam Hussein.

This fascinating and highly original book will be of enormous interest to a broad audience – from students and academics focusing on leadership, political science, and political psychology, to practitioners such as managers, executives, consultants, and leadership coaches.
Critical Acclaim
‘A serious, but readable, study that should be widely read by all concerned with leadership issues.’
– International Journal of Strategic Management

‘A serious but readable study that should be widely read by all concerned with leadership issues.’
– Long Range Planning

‘This book is the most up-to-date available investigation of the understanding of tyranny and terror that psychologists, psychoanalysts and experts on group and institutional behaviour can provide. Manfred Kets de Vries has produced a masterpiece. He draws on a wealth of published research in the field and relates it in an academically excellent, yet eminently readable, way to the premier problem of the beginning of the 21st century. I strongly recommend it.’
– Anton Obholzer, formerly Tavistock Centre London, Psychoanalyst and Organizational Consultant

‘From constructive narcissism to reactive narcissism, we are but one step away from megalomania and terror. Professor Kets de Vries traces the origin of leadership by terror to early childhood in this case study of Shaka Zulu. A gruesome story warns us that terror may be inherent in the human condition.’
– Abraham Zaleznik, Harvard Business School, US

‘Kets de Vries has written another terrific book on leadership. However, this work will prove both timely and insightful to students of leadership and political psychology. Through the tale of Shaka Zulu, Kets de Vries introduces us to our very own despotic tendencies and thus familiarizes the reader with the human side, however horribly oppressive and destructive, of leadership by terror. Here is a genuine contribution to the field of leadership studies.’
– Michael A. Diamond, University of Missouri–Columbia, US
Contents
Contents: Preface Introduction Part I: The Historical Context 1. A School for Tyranny: Learning from Hardship, Betrayal and Humiliation 2. The Making of a Military State: Honing the Assegai 3. Ruling by Fear: Bringing Enemies and Allies Alike to Submission Part II: The Question of Character 4. The Inner Theatre of the King: Acting Out Personal Concerns on a Public Stage 5. Monte Cristo in Africa: Seeking Revenge for Past Wrongs 6. The Nature of Relationships: Being Unable to Establish Real Intimacy 7. Paranoia – The Disease of Kings: Exercising Caution Beyond the Bounds of Danger 8. The Terrorist Mind: Protecting the Self by Victimizing Others Part III: Leadership by Terror 9. Following the Leader: Colluding in Cruelty 10. Lessons in Leadership: Teaching by Example and Omission Part IV: Deconstructing Totalitarianism 11. A Throne of Blood: Deploying the Tools of Tyranny 12. Dancing with Vampires: Preventing Tyranny through Effective Governance Bibliography Index
Add to Wish List
eBook for individuals
978 1 84542 347 6
From £21.60
Click here for options
eBook for library purchase
978 1 84542 347 6
View sample chapter and check access on:

Management Lessons from Game of Thrones