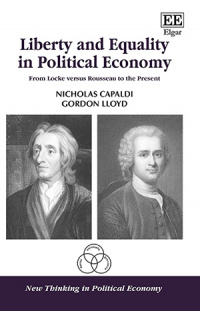 9781784712525 Edward Elgar Publishing
New Thinking in Political Economy series
Nicholas Capaldi, Legendre-Soulé Distinguished Chair in Business Ethics, Loyola University, New Orleans and Gordon Lloyd, Senior Fellow, Ashbrook Center, and Dockson Emeritus Professor of Public Policy, Pepperdine University, US
Publication Date: 2016 ISBN: 978 1 78471 252 5 Extent: 256 pp
Liberty and Equality in Political Economy is an evolutionary account of the ongoing debate between two narratives: Locke and liberty versus Rousseau and equality. Within this book, Nicholas Capaldi and Gordon Lloyd view these authors and their texts as parts of a conversation, therefore highlighting a new perspective on the texts themselves.

More Information
Critical Acclaim
Contents
More Information
Liberty and Equality in Political Economy is an evolutionary account of the ongoing debate between two narratives: Locke and liberty versus Rousseau and equality. Within this book, Nicholas Capaldi and Gordon Lloyd view these authors and their texts as parts of a conversation, therefore highlighting a new perspective on the texts themselves.

The authors argue that the debate initiated between Locke and Rousseau continues to define political economy today. They not only explore the strengths of each narrative, but also indicate how proponents within each will respond to their rivals. Other important views in economics and philosophy, including the works of Immanuel Kant, Georg Wilhelm Friedrich Hegel, Alexis de Tocqueville, John Stuart Mill, Milton Friedman, Friedrich Hayek and Michael Oakeshott, are examined in conjunction with Locke; the works of the French Revolution, Pierre-Joseph Proudhon, Karl Marx and Friedrich Engels, the Progressives, John Maynard Keynes, John Kenneth Galbraith, John Rawls and Thomas Piketty reflect Rousseau’s divergent views. Together this provides a rich exploration of the philosophical underpinnings of modern economics and politics.

This comprehensive analysis will be of interest to philosophers, political theorists and economists who wish to join the conversation. Graduate and undergraduate students in political theory, history of economics, political philosophy and business ethics courses will also find this book valuable.

Critical Acclaim
‘In an age of specialization, Nicholas Capaldi and Gordon Lloyd have recreated that ancient tool of learning: the conversation. Beginning with the debate between John Locke and Jean-Jacques Rousseau, and continuing through to John Kenneth Galbraith, Milton Friedman, Friedrich Hayek and Thomas Piketty, this book invites the reader to join a conversation which has now lasted over three centuries. Don’t read this book if you just want a simple answer to complex problems. Do read this book if you want to think deeply and widely about the fundamental questions of how to organize a society.’
– Jim Hartley, Mount Holyoke College, US

‘Read this articulate adventure in Liberty, from John Locke through Adam Smith to Thomas Piketty.’
– Vernon Smith, Chapman University, US and 2002 Nobel Laureate in Economics
Contents
Contents: 1. John Locke and the Three Pillars of Liberty 2. Jean Jacques Rousseau and the Three Pillars of Equality 3. Adam Smith and the System of Natural Liberty 4. The Arrival of the Liberty Narrative in America 5. The French Revolution and the Socialist Alternative 6. The Evolution of the Liberty Narrative in Nineteenth Century Continental Thought: Tocqueville, Kant and Hegel 7. Mill’s Place in the Liberty Narrative 8. The Scientific Socialism of Marx and Engels 9. Charles Beard, The Progressives, and Roosevelt’s New Deal 10. Keynes and Hayek: The Road to Serfdom 11. Locke and Keynes Arrive in the Twentieth Century US: Galbraith, Harrington, Friedman, and Rawls 12. Hayek and Oakeshott: Making a New Case for Liberty 13. Thomas Piketty: The Apotheosis of Rousseau and the French Revolution Index