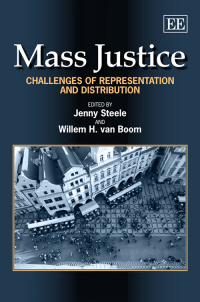 Challenges of Representation and Distribution

The editors identify and respond to the need for reflection on the notion of ‘mass justice’. The assembled contributors show that while private law is usually debated in terms of individual rights and duties, the reality is that these are deeply influenced by collective issues. They address examples such as the operation of class actions; the availability of insurance funds; the logistics of negotiating with and compensating a wide range of individuals; as well as distribution of assets in insolvency proceedings.

This unique and detailed book will appeal to academics and students of private law as well as those with an interest in law and society. Scholars from non-law disciplines with an interest in insurance and liability will also find this study thought-provoking, as will practitioners and policy-makers.
Critical Acclaim
‘Mass Justice is an interesting volume which Edward Elgar saw the wisdom of publishing since, in the United Kingdom, there is not much legal activity as regards class actions, unlike in the United States. . .’
– Sally Ramage, The Criminal Lawyer

2. Mass Resolution of Mass Torts: Emerging Issues in the United States and the Global Future
Richard A. Nagareda

9. Dealing with Damages in Insolvency: The Insolvency Administrator’s Collective Claim for Damages versus Individual Claims of Creditors
Frank M.J. Verstijlen

11. The International Oil Pollution Compensation Funds and Dealing with the Masses
Willem Oosterveen

12. Representation in Collective Bargaining on Employment Conditions in the Netherlands
Zef Even