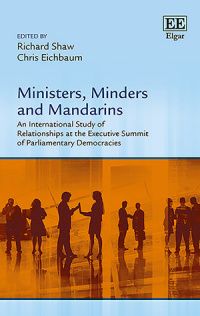 More Information
Critical Acclaim
Contributors
Contents
More Information
Ministers, Minders and Mandarins brings together the leading academics in this specialty to rigorously assess the impact and consequences of political advisers in parliamentary democracies. The ten contemporary and original case studies focus on issues of tension, trust and tradition, and are written in an accessible and engaging style.

Using new empirical findings and theory from a range of public policy canons, the authors analyse advisers’ functions, their differing levels of accountability and issues of diversity between governments. Cases include research on the tensions in the UK, the possible unease in Swedish government offices and the role of trust in Greece. Established operations in Australia, Canada, Ireland and New Zealand are compared to relative latecomers to advisory roles, such as Germany, the Netherlands and Denmark. A key comparative work in the field, this book encourages further research into the varied roles of political advisers.

Offering an excellent introduction to the complex role political advisers play, this book will be of great interest to upper undergraduate and postgraduate students studying political science and policy administration, as well as researchers and scholars in public policy.

Critical Acclaim
‘Ministerial advisers have grown rapidly in parliamentary democracies. Scholarship has struggled to keep up. This book breaks new ground by bringing together leading scholars from European and Westminster systems in a fascinating comparative study.’
– Robert Hazell, UCL, UK

6. Greece: Political advisers and circles of trust in Greek ministerial cabinets: Cardinals of the conclave, managers and the children of favouritism
Athanassios Gouglas

8. The Netherlands: The emergence and encapsulation of ministerial advisers
Caspar van den Berg

Nationalism and Democracy in the Welfare State