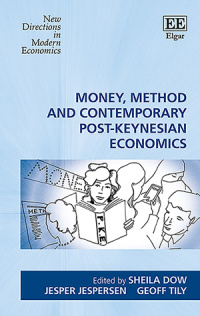 More Information
Critical Acclaim
Contributors
Contents
More Information
The Post-Keynesian methodology emphasising uncertainty is indispensable to analysing and understanding the major challenges of the 21st Century. On that basis, this book focuses on the failures of the market economic system to secure stability and sustainability, and demonstrates why this is not recognised by conventional economic theory.

The Post-Keynesian economics set out here aims for an understanding of the economy as a whole and as an integral part of society. Chapters analysing money, banks and finance as dynamic phenomena open the book. They are followed by chapters focusing on methodological issues such as uncertainty, longer-term aspects, sustainability and other non-monetary economic activities.

This important book is a useful tool for students and researchers who wish to gain a better understanding of real world economics. In these areas where conventional macroeconomic theory may not be sufficient, this book offers viable Post-Keynesian alternatives.
Critical Acclaim
‘The Post-Keynesian contributors to this remarkable volume provide contrasting opinions on monetary theory and monetary policy on four continents, together with a discussion of some major issues in macroeconomic methodology. The book concludes with incisive analyses of two big issues for the future: the probable approach of a stationary state, and the emergence of personal care as a large and growing component of aggregate output.’
– John E. King, La Trobe University and Federation University, Australia

‘This book is a must-read for those who wish to recover the essence of Keynes’s message on monetary economics. The authors apply Vicky Chick’s interpretation of Keynes and of the evolution of the banking system to contemporary issues such as shadow banking, financialization and the problems of the BRIC economies.’
– Marc Lavoie, University of Paris, France
Contributors
Contributors: A. Asensio, V. Chick, S. Dow, A. Freeman, J. Ghosh, C. Goodhart, P. Hawkins, J. Jespersen, M.O. Madsen, R. McMaster, C.J. Rodríguez-Fuentes, R.J. Rotheim, S. Sen, R. Studart, B. Tieben, G. Tily

4. The evolutionary approach to banking and the credit-hungry consumer: a view of the failure of African Bank
Penelope Hawkins

11. A ‘static model of a dynamic process’: underemployment equilibrium with flexible wages and prices
Angel Asensio

12. The economics of enough: a future for capitalism or a new way of living?
Victoria Chick and Alan Freeman

13. Does Post Keynesianism need a theory of care?
Robert McMaster