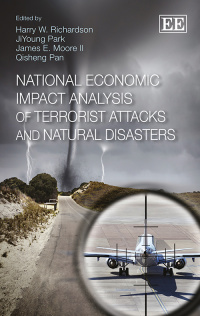 More Information
Critical Acclaim
Contributors
Contents
More Information
The United States has encountered increasing levels of terrorist activity and a number of significant natural disasters in this millennium, a pattern which has also occurred globally. There has been a degree of uncertainty over their impact on the national economy.

A unique contribution towards mitigation is offered in this book, which develops a national economic impact model to estimate the effects of simulated terrorist attacks and real world natural disasters on individual US States and economic sectors. The model, NIEMO (The National Interstate Economic Model), examines interindustry relationships and interregional trade, and presents a multiregional input-output analysis of the economic impact resulting from these events.

Students and researchers in regional science, planning, economics and geography will find this book offers an informative perspective. Practitioners, policy makers and general readers interested in public policy issues will appreciate the insights.

Critical Acclaim
‘The NIEMO development effort is as ambitious as any in regional science. In addition to immense data handling issues faced are the numerous conceptual and theoretical hurdles these researchers have cleared so adeptly. The volume’s chapters present many of the critical areas of analysis to which analytical frameworks like NIEMO can be put, and demonstrate what can be accomplished when a group of dedicated scholars focus their collective energy on the development of computational models of complex social systems.’
– Randall Jackson, Director, Regional Research Institute, West Virginia University, US