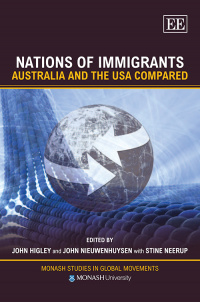 Australia and the USA Compared

More Information
Critical Acclaim
Contributors
Contents
More Information
This timely book examines the immense surges in immigration since the mid-1990s in Australia and the United States, two of the world’s most important settler-receiving countries.

Australia’s shift to a points-based, skills-oriented system is contrasted with the political deadlock that has prevented any basic change in US immigration policy during this period. Focusing on immigration policy trends, effects on labour markets, successes and failures in integrating massive numbers of new immigrants, and the future of multiculturalism, the book ponders many of the policy dilemmas that confront both countries.

Drawing on extensive research findings in the field of immigration policy, this book will prove a fascinating read for both scholars and postgraduate students working on immigration, as well as undergraduates studying courses on Australia and comparisons of the Australian and American policy arenas. Public servants engaged in administering Australian and US immigration policies will also find this book invaluable.
Critical Acclaim
‘. . . the true strength of this book is the chapters stand as well alone as they do together, allowing the reader to peruse those of most interest. This work provides enough to whet the intellectual appetite, providing an overview and basic introduction to some of the current key issues on immigration in the two countries, and provides many references for readers interested in learning more.’
– Nikoleta Rukaj, Journal of Population Research

‘. . . the volume provides an important contribution to international immigration (policy) studies and will serve as a useful resource for students and expert readers alike.’
– Martina Boese, Pacific Affairs

‘The book will be a good addition to policymakers’, faculty, and student libraries, and they will find themselves going back to the book time after time for data and information that they can compare with their own country’s history and statistics. Even though the focus is on two specific countries, it is a timely piece of scholarship and one that should be read by all those in the field of immigration. The editors are to be congratulated for putting together an excellent and timely book on immigration issues.’
– James Frideres, Canadian Studies in Population

‘These papers capture the pluralist phenomenon of two of the largest immigrant-receiving countries of all time. Within this 200+ page volume, then, is to be found a truly informative mass of data (complete with graphs, tables and statistics) and learned analyses pertaining to the twin-focus of its title which will serve as a valuable tool of reference and reflection by all who have an interest in the subject.’
– Ramnik Shah, Immigration, Asylum and Nationality Law
Contributors
Contributors: J. Bachmeier, F.D. Bean, S. Bertone, B. Birrell, S.K. Brown, B. Duncan, G.P. Freeman, J. Higley, G. Hugo, A. Jakubowicz, J. Jupp, D.L. Leal, S. Neerup, J. Nieuwenhuysen, S.J. Trejo, C. Wong
Contents
Contents:

6. Immigration and the Labour Market in Australia
Santina Bertone

11. Who Belongs? Assimilation, Integration and Multiculturalism in the United States
Cara Wong