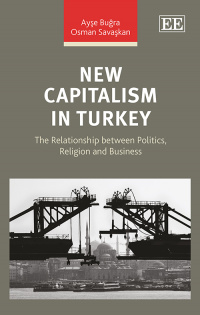 The Relationship between Politics, Religion and Business

This book focuses on the developments that have transformed the economic, political and cultural coordinates of business activity; led to new forms of interest representation; and changed the relationship between government and business in Turkey in the post-1980 period. Ayşe Buğra and Osman Savaşkan argue that political action plays a crucial role in shaping the configuration of the business community, influencing the patterns of business development, and informing the emergence of rival models of capitalist development and political change endorsed by different groups of entrepreneurs. Moreover, the book explores the idea that whilst the use of religion as a strategic resource by some business associations serves to create bonds of trust and solidarity among their members, it also contributes to the polarization of the business community.

This interdisciplinary book will be an invaluable resource for academics, graduate students and researchers interested in political economy, political science, sociology, economic history, and organization studies. It will also appeal to journalists and business people, especially those investing or planning to invest in Turkey or the Middle East.
Critical Acclaim
‘New Capitalism in Turkey is a theoretically nuanced and empirically rich book. Buğra and Savaşkan provide us with a fresh, detailed and annotated account of the changes taking place in the domain of political economy in Turkey. In doing so, they challenge many commonly-held assumptions about government-business relations, the intra-business relations, the secular-Islamic cleavage, and the political strategies and discourses of the main actors. The data sources of the book are also rich and include a wide range of primary sources, including the ones collected through fieldwork. This timely book should be a required reading for all students of Turkish politics.’
– Gamze Cavdar, Middle East Policy Council

‘This theoretically informing book provides one of the strongest analyses of Turkish political economy. Buğra and Savaşkan decisively dispel myths regarding the new, allegedly self-made and “small” entrepreneurs who form the backbone of Turkish success. Drawing on original documents, interviews, and statistics, they demonstrate that politics (as practiced by regimes, parties, and associations) has “made” the Turkish pious business class. No one can think of markets and market actors in the same way after reading this book.’
– Cihan Ziya Tugal, UC Berkeley, US

‘This impressive work places Turkey firmly on the map of comparative politics and political economy. It adds intriguing facets to what we know about the relationship between the state, democracy and capitalist development in an age of neoliberalism. It also sheds new light on the role of religion in economic change and class formation in emerging countries on the periphery of contemporary capitalism. Moreover, in emphasizing the role of business associations in the politically sponsored rise of a post-Fordist model of globalized national capitalism, the book provides exciting new insights on a subject that has been regrettably neglected in recent years.’
– Wolfgang Streeck, The New School for Social Research, US

‘Power has shifted in Turkey over the last decade, both within business and the state, towards groups with religious-conservative rather than Kemalist-secular sensibilities. This book goes deep inside this transformation to analyze the role of Muslim business networks and their relationship with the state. You will not find a better guide to Turkey’s emergent new capitalism.’
– Dani Rodrik, Institute for Advanced Study, US
Contents
Contents: Introduction 1. Economic Development and Cultural Modernization in Republican Turkey: A Brief Overview 2. The Changing Place of the Economy and Religion in Turkish Society Since 1980 3. The New Political Economy of Capital Accumulation 4. Business Associations as Political Actors 5. Polarization at the Local Level Conclusion Index
Add to Wish List
eBook for individuals
978 1 78347 313 7
From £25.00
Click here for options
eBook for library purchase
978 1 78347 313 7
View sample chapter and check access on: