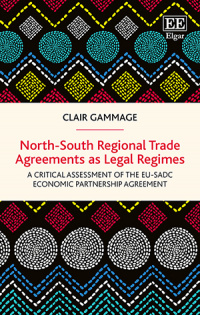 A Critical Assessment of the EU-SADC Economic Partnership Agreement

9781784719616 Edward Elgar Publishing
Clair Gammage, Senior Lecturer, University of Bristol Law School, UK
Publication Date: 2017 ISBN: 978 1 78471 961 6 Extent: 384 pp
This book offers a critical reflection of the North-South regional trade agreements (RTAs), known as the Economic Partnership Agreements, negotiated between the EU and the African, Caribbean, and Pacific countries. Conceiving of regions as legal regimes, Clair Gammage highlights the challenges facing developing countries when negotiating RTAs with developed countries and interrogates the assumption that these agreements will and can promote sustainable development through trade.

North-South Regional Trade Agreements as Legal Regimes offers a rich analysis of the negotiations between the EU and the southern African regional group as well as a factual presentation of liberalisation under the final agreement. Interrogating the assumption that economic growth will lead to sustainable development, this book draws insights from the experience of the Caribbean countries as they implement their Economic Partnership Agreement to question the extent to which RTAs between developed and developing countries will and can promote development through trade.

This unique book will appeal to academics and advanced students in international trade law and development law. Trade practitioners in government, the private sector and civil society, including those involved in policy making and challenging the policy making process will appreciate the author’s lucid analysis of analysis of the law and the broader concept of promoting development through trade.
Critical Acclaim
‘This book is a good read not only for scholars who would like to understand the complex trade relationship between the EU and its former ACP colonies, but also for policy-makers and analysts who would find enough substance to anticipate the impact of most decried unbalanced trade agreements between a super economic power and powerless countries without the necessary expertise.’
– Elvis Mbembe Binda Kigali, Common Market Law Review

‘For the best part of two decades, the EU and ACP have been engaged in protracted negotiations, to find a successor to the Lomé trade and development regime. In this important new book, Clair Gammage shows how and why these negotiations have defied common understanding of how North-South trade diplomacy actually works. Combining critical legal and international political economy scholarship with rich empirical detail, Gammage argues that the absence of equitable and meaningful deliberation during the process of the negotiations ultimately determined the outcome of these negotiations. This, in turn, explains why the EU-ACP Economic Partnership Agreements have, in almost all instances, fallen a long way short of original ambitious. In short, this book is an essential read for all interested in the past, present and future of EU-ACP relations.’
– Tony Heron, University of York, UK

‘This is a must-read for anyone interested in regionalism, trade, human rights and sustainable development, and how law connects these areas. While focusing empirically on the Economic Partnership Agreement (EPA) between the European Union (EU) and the Southern African Development Community (SADC), Gammage transcends the bounderies of law, politics, economics, development studies and ethics with a truly critical and interdisciplinary account that combines various theoretical perspectives including the Habermasian paradigm of law as discourse, the Gramsian notion of hegemony, and the capabilities approach of Amartya Sen.’
– Jan Orbie, Ghent University, Belgium

‘Gammage offers a fascinating discussion about the evolution and development of regional trade agreements within the EU and African states and their future direction. By focusing on the EU-Africa EPAs, the work helps in understanding current bottlenecks and assists in enhancing the performance of these treaties for the benefit of both blocs. . . Gammage’s work offers an interesting and timely read and her ability in dealing with the complex issues surrounding the debate should be applauded. If you are looking to occupy your remaining summer holiday with an interesting read, this is the book to go for.’
– Manchester Journal of International Economic Law
Contents
Contents: 1. Integration Through Law 2. Regional Trade Agreements as Legal Regimes 3. The EU as a Global Actor 4. The Normative Legal Character of Sustainable Development 5. Transforming the ACP-EU ‘Special’ Relationship 6. African Regionalisms as Flexible Legal Regimes 7. Regionalism in Southern Africa 8. The SADC EPA: A Driver of Development? 9. Lessons from the CARIFORUM EPA Index