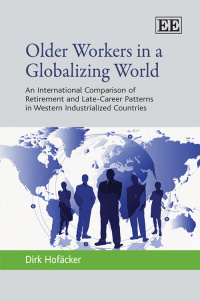 Older Workers in a Globalizing World

9781848448179 Edward Elgar Publishing
Dirk Hofäcker, Institute for Social Work and Social Policy, University of Duisburg-Essen, Germany
Publication Date: 2010 ISBN: 978 1 84844 817 9 Extent: 336 pp
This timely book investigates the growth of the early retirement trend and its varying spread among different groups of older workers in fourteen modern societies. It argues for a differentiated political approach to reverse early retirement, which relies on both pension and employability policies for older workers.

More Information
Critical Acclaim
Contents
More Information
This timely book investigates the growth of the early retirement trend and its varying spread among different groups of older workers in fourteen modern societies. It argues for a differentiated political approach to reverse early retirement, which relies on both pension and employability policies for older workers.

Examining the early retirement trend virtually all modern societies have been faced with since the onset of the globalization process in the 1970s and 1980s, this book provides a thorough analysis of older workers’ late careers and their retirement transitions, as well as explaining why this trend has developed differently between nations. To promote an effective reversal of the early retirement trend, national policymakers are advised not to concentrate their efforts exclusively on reducing the financial incentives for an early exit still present in most national pension systems. In addition, it is also recommended that they invest in the employability of older workers, implying a thorough reconsideration of the design of education and labor market policies.

Dirk Hofäcker presents a unique and comprehensive synthesis of theories describing and explaining the trend towards early retirement, and critically discusses their comparative advantages and shortcomings. Researchers and students of sociology, economics, gerontology, demography and comparative welfare states should not be without this book and policymakers and practitioners dealing with labor market policies will find it invaluable.
Critical Acclaim
‘This carefully syntheized analysis of labor patterns across different countries in the European Union and the United States is extremely well organized and rich in content. . . Hofäcker deserves praise for his important and timely scholarship.’
– Tracey Ellen Ryan, Contemporary Psychology: APA Review of Books

‘. . . well written and presents a wealth of data clearly. . . a useful resource for scholars seeking to go beyond generalisations about early retirement whether they be gerontologists, economists with interests in pension policies, or social historians who wish to investigate the perplexities of ageing societies at a time when retirement curiously seemed to be occurring earlier.’
– Jill Manthorpe, International Journal of Ageing and Later Life

‘It is an excellent source for those seeking to access the key debates in the literature surrounding age and the labour market. . . he succeeds in providing an erudite cross-cultural examination with his findings making a strong contribution to our understanding of retirement patterns using large-scale panel data for 14 countries drawn from OECD, Eurostat and EC data.’
– Kathleen Riach, Work, Employment and Society

‘. . . the book can be recommended to all with an interest in the issue of older workers in a globalised world.’
– Ageing and Society

‘Early retirement has been a policy to cope with the problems of massive unemployment in many Western welfare states. However, it has become apparent that this strategy is costly and destroys human capital urgently needed in ageing societies. This book offers a comprehensive and up-to-date study of late-career patterns and processes of early retirement in fourteen OECD countries, using both cross-sectional and longitudinal data. It is an important contribution to life-course research and will provide the foundation for any serious discussion on pension reforms and increasing the employability of older workers.’
– Hans-Jürgen Andreß, University of Cologne, Germany
Contents
Contents: Foreword by Hans-Peter Blossfeld 1. Introduction: The ‘Two-faced Pension Crisis’ 2. State of the Art in Social Science Research 3. Globalization, Institutional Strategies and Late Careers 4. The Macro-perspective: Late Careers and Retirement in International Comparison 5. The Micro-perspective: A Four-country Comparison 6. Conclusions References Index
Add to Wish List
eBook for individuals
978 1 84980 335 9
From £25.00
Click here for options
eBook for library purchase
978 1 84980 335 9
View sample chapter and check access on: