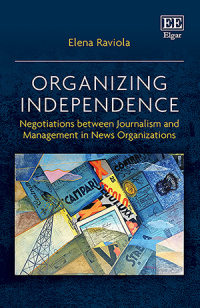 Negotiations between Journalism and Management in News Organizations

More Information
Critical Acclaim
More Information
This revealing book goes behind the scenes of normative principles of media independence to investigate how that independence is actually practiced and realized in everyday working life. Taking an ethnographically rich journey through European news organizations, Elena Raviola exposes the diverse and complex ways in which the ideal of independence is upheld, and at the same time inevitably betrayed, in the organizational life of media companies.

Elena Raviola presents a distinct organizational analysis of media independence throughout the book, offering a close study of three news organizations in Europe – the largest Italian financial newspaper Il Sole-24 Ore, the largest Swedish regional newspaper company Stampen and the French pioneer online-only news website Rue89. In each of them, the implications of digitalization on their practices of independence is explored and analyzed. The book ultimately sheds light on how digital technologies are practically reshaping democratic principles such as media independence, while being embedded in the existing organizational and professional structures of democratic societies.

Organizing Independence will enrich the reader's understanding of media independence in practice, beyond the normative principles, and so will be a key reference point for researchers in management and organization studies, media studies and anyone interested in the future of media.
Critical Acclaim
‘In a world facing the danger of fake news and “alternative facts”, Elena Raviola's fascinating journey into the realm of contemporary media is a must read for anyone who wants to understand the fragile and subtle equilibrium between the quest for independence of the press and the need for economic resources for the production of reliable news. In other words, this most important book gives us the means to preserve, while it is still time, those professional and free media our democracy depends on.’
– Franck Cochoy, Toulouse Jean Jaurès University, France and Senior Member of the Institut Universitaire de France

‘Rich in facts, strong in ideas, deep in its critique – a much needed, important book on the changing organization of journalism and its implications for society.’
– Martin Kornberger, University of Edinburgh, UK

‘In times of fake news and social media, it is important to know whom to trust. One of the best ways of learning that is through acquiring a direct insight into the workings of professional media, which is exactly what Elena Raviola offers her readers. Organizing Independence is a book for media scholars, for management and organization scholars, and for everybody who reads newspapers and listens to the news.’
– Barbara Czarniawska, University of Gothenburg, Sweden
Add to Wish List
eBook for library purchase
978 1 80220 037 9
View sample chapter and check access on:

Leading Innovation and Entrepreneurship in Healthcare

Research Handbook on New Frontiers of Equality and Diversity at Work