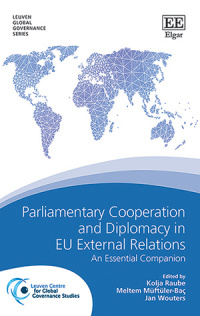 9781786438843 Edward Elgar Publishing
Leuven Global Governance series
Edited by Kolja Raube, Assistant Professor, Faculty of Social Sciences, Senior Researcher, Leuven Centre for Global Governance Studies, and Director of the Centre for European Studies, KU Leuven, Belgium, Meltem Müftüler-Baç, Professor of International Relations and Jean Monnet Chair ad personam, Sabancı University, Istanbul, Turkey and Jan Wouters, Full Professor of International Law and International Organizations, Jean Monnet Chair ad personam EU and Global Governance and Director, Institute for International Law and Leuven Centre for Global Governance Studies, KU Leuven, Belgium
Publication Date: 2019 ISBN: 978 1 78643 884 3 Extent: 544 pp
In today’s increasingly complex and interdependent world, the role of parliaments in external affairs remains a relatively under explored topic of research. The multiple patterns of global governance are mostly dominated by the executive branches of government, with parliaments relegated to the sidelines. This insightful book aims to challenge this dominant perspective and demonstrate the increased networking of parliaments both within the EU and with external actors outside the EU. It not only sheds light on EU parliamentary cooperation and networking, but also reveals the growing scope and role of parliamentary scrutiny, control and conflict mediation.

More Information
Critical Acclaim
Contributors
Contents
More Information
This insightful companion examines the role of parliaments in the external relations of the EU, a relatively under-explored topic of research in an increasingly complex international relations environment. In fact, this volume challenges the dominant perspective, demonstrating the increased networking of parliaments both within the EU and with external actors, shedding light on the growing role of parliamentary scrutiny, control and conflict mediation.

Providing a comparative overview of parliamentary action in EU external relations, this book considers both the conceptual basis of these actions and examines key case studies for empirical analysis. It situates the EU’s internal and external dimension of parliamentary cooperation in a wider context, engaging in a debate that goes beyond the EU into relationships with neighbouring regions as well as parliamentary institutions from other areas of the globe.

Advanced students and researchers of EU external relations and global governance will greatly benefit from reading this timely book. At the same time, international relations and political science scholars will also appreciate this thorough and comprehensive volume.

Critical Acclaim
‘In a period marked by nationalism and populism, the relevance of the roles played by parliaments is sometimes underestimated and rather deserves greater attention. The book edited by Raube, Wouters and Müftüler-Bac gathers a group of leading scholars in the field of parliamentary studies and contributes to bridge a gap in a very sensitive policy field, that is to say the external relations of the European Union. A wide list of approaches and theoretical and empirical investigations demonstrates that, despite the dominant influence of the executive branches of government, not only networking of parliaments has enlarged, but also traditional and innovative roles, i.e. control and conflict mediation, have been amplifled and diversified. Therefore, parliaments are far from being put aside.’
– Daniela Irrera, EuropeNow

‘If you believe that external relations constitutes the next frontier of democratic assertion in the EU; if you are a sceptic and ask what difference can parliaments at all levels make to the EU’s external policy; if you are intrigued by the connection between transnational parliamentary cooperation within Europe and democratization outside Europe; if you want to explore the many motivations, opportunities and paths for such developments under the Lisbon Treaty, and to do so in many disciplinary languages, this book is for you. An essential guide indeed.’
– Kalypso Nicolaidis, University of Oxford, UK

‘This volume provides a comprehensive and detailed analysis of the role of parliaments in EU external relations, one of the most topical issues in parliamentary studies and international relations today. Overall the chapters offer normatively and empirically well-informed contributions on parliamentary cooperation and diplomacy in a variety of international and regional settings and policy areas vis-à-vis the EU. The book is a must-read for scholars and professionals working at the intersection between EU law, international law, constitutional law and political science.’
– Cristina Fasone, LUISS University, Italy

PART I PARLIAMENTARY COOPERATION AND DIPLOMACY IN EU EXTERNAL RELATIONS: CONCEPTIONS AND THEORETICAL APPROACHES
1. Off or on field? – The multilevel parliamentary field of EU external relations
John Erik Fossum and Guri Rosén

2. Inter-parliamentary cooperation in the European Union: Towards institutionalization?
Thomas Christiansen and Afke Groen

3. Bringing transnationalism (once again) back in: Insights for the parliamentary dimension of European foreign policy
Daan Fonck and Kolja Raube

5. Rationales of inter-parliamentary cooperation in European security politics: From the Inter-Parliamentary Union to the IPC-CFSP
Wolfgang Wagner

PART II INTER-PARLIAMENTARY COOPERATION AND DIPLOMACY ARENAS IN EU EXTERNAL RELATIONS
6. How can inter-parliamentary cooperation contribute to the legitimacy of the EU as an international actor?
Christopher Lord

10. The European Parliament in inter-parliamentary cooperation and diplomacy
Diane Fromage

11. The parliamentary dimension of the EU rotating presidency: Bringing back national concerns through the “backdoor”?
Stelios Stavridis and Maria Gianniou

PART III INTER-PARLIAMENTARY COOPERATION AND DIPLOMACY IN THE EU’s NEIGHBOURHOOD
13. The Role of the European Parliament in the Enlargement Process: Insights from Inter-Parliamentary Relations with Turkey
Seda Gürkan

15. The Turkish-EU Cooperation on the Refugee Crisis: The Turkish Perceptions in the Parliamentary Debates
Ipek Demirsu and Meltem Müftüler-Baç

16. The European Parliament as a ‘normative actor’ in inter-parliamentary cooperation?
Cosima Glahn

17. The European Parliament as an agenda setter of EU policy toward its neighbourhood
Magdalena Góra

18. Servants or rivals? Uncovering the drivers and logics of the European Parliament’s diplomacy during the Ukrainian crisis
Daan Fonck

20. Cooperation between the European Parliament and the Parliament of Mercosur: Strategic partnership towards effective interregionalism and effective multilateralism
Ana María Moure

21. Asia and the EU: How to add a regional dimension to the parliamentary relationship
Xavier Nuttin