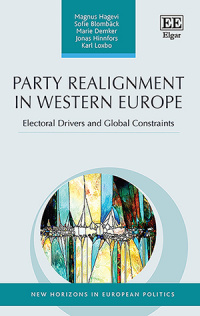 More Information
Critical Acclaim
Contents
More Information
Identifying a crisis for representative democracy in Western European party systems, this essential book studies the widening gap between political parties’ ideological economic Left–Right rhetoric and their increasing convergence on policymaking. Addressing whether these ideologies are converging or diverging, it answers whether these changes are initiated by the parties themselves, aligned with voter demand, or forced by economic globalization.

The crisis of representative democracy in Western Europe is a prevalent issue in comparative politics. This comprehensive study assesses the problems faced by representative democracy by analysing ideological polarization and inter-party conflict in relation to the changing linkage between citizens, parties, and public policies, and the implications this has for representative democracy. Considering both supply-side and demand-side theories, it analyses five major theoretical themes central to the ideological convergence and polarization within party systems, including the cartel party thesis, the median voter theorem, realignment theory, consensus democracy theory, and globalization theory. Going beyond theory, chapters use five decades of empirical research to present new and unique longitudinal and comparative data sets covering eight party systems, ultimately providing a more accurate diagnosis of the vitality of representative democracy in contemporary Western Europe.

Combining in-depth theoretical analysis with empirical research, this comprehensive book will prove invaluable to students and scholars of politics and political science, and policymakers concerned with party systems.