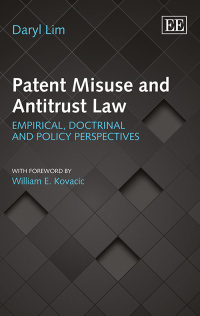 9780857930170 Edward Elgar Publishing
Daryl Lim, Assistant Professor of Law, The John Marshall Law School, US
Publication Date: 2013 ISBN: 978 0 85793 017 0 Extent: 512 pp
This unique book provides a comprehensive account of the patent misuse doctrine and its relationship with antitrust law. Created to remedy and discourage misconduct by patent owners a century ago, its proper role today is debated more than ever before. Innovation and competition take place in increasingly complex environments that demand a clear understanding of where illegality ends and legitimate corporate strategy begins.

More Information
Critical Acclaim
Contents
More Information
This unique book provides a comprehensive account of the patent misuse doctrine and its relationship with antitrust law. Created to remedy and discourage misconduct by patent owners a century ago, its proper role today is debated more than ever before. Innovation and competition take place in increasingly complex environments that demand a clear understanding of where illegality ends and legitimate corporate strategy begins.

The book is an essential resource for the curious, the expert and all those engaged in deciding what patent misuse means and should mean today. In addition to in-depth doctrinal and policy perspectives, it looks at patent misuse through the eyes of today’s leading practitioners, judges, government officials and academics. It also presents a qualitative analysis of modern misuse case law spanning 1953 to 2012. The result is a compelling account that lays out an important doctrinal, policy and empirical framework for future cases and scholarship.

Patent law students and scholars will find the author’s comprehensive study of popular and actual perceptions of the misuse doctrine a valuable resource, while practitioners, government officials and judges will appreciate the predictive value of the author’s findings.
Critical Acclaim
'One of the most detailed and insightful analyses of the important, but maddeningly vague, doctrine of patent misuse and its relationship to antitrust law… Professor Lim tackles this complicated topic in an innovative and effective way. In addition to thoughtful legal, economic, and policy analysis, he uses a comprehensive empirical survey and coding of all patent misuse cases through the end of 2012 and substantial qualitative empirical research through interviews with practitioners and judges about the perceived, and actual, metes and bounds of this slippery doctrine. He thus throws valuable light on the state of the conventional wisdom as well as when and how actual practice and case law departs from that conventional wisdom'
– Spencer Weber Waller, World Competition Law and Economics Review

'This is a long overdue book on the evolution of the US doctrine of patent misuse and its relationship with antitrust law.'
– Steven Anderman, Queen Mary Journal of Intellectual Property

‘The age old debate as to whether patents are simply a property right in that any trespassing on the property should be punishable, or whether they are tools of economic policy so that questions of misuse can arise when they are not used to encourage commercial developments of new products, has become heated with the advent of patent assertion entities and the problems that arise when use of a patented invention is necessary to comply with an industry standard. Daryl Lim’s timely book provides a sober background against which to consider such ideas and possible expansion of types of action that may give rise to claims of patent misuse in the future.’
– John Richards, Partner, Ladas & Parry, LLP

‘Three major contributions [of Patents Misuse and Antitrust Law] stand out. First, it illustrates as well as any other work how to bridge the study of antitrust law and patent law. . . A second and related feature is Professor Lim’s excellent use of historical narratives to show how patent misuse concepts have developed over time. . . A third impressive dimension is its powerful empirical orientation. Professor Lim combines a comprehensive examination of misuse cases with extensive interviews to demonstrate how theory meets practice. In these respects and others, Patent Misuse and Antitrust Law broadens and extends the emerging path of a refreshing new scholarship that links antitrust and patent law.’
– From the foreword by William E. Kovacic, former Chairman of the Federal Trade Commission and Global Competition Professor of Law and Policy, George Washington University Law School, US

‘[A]n excellent introduction to patent misuse and antitrust law, of much importance in this current hysteria of fighting patent trolls. He covers much of the case law, historic and recent, and how it applies to current patent assertion strategies. He also covers the past and possible future evolution of this policy area. If you have to read this type of stuff, this is a very good read.’
– Greg Aharonian, Editor, Internet Pat ent News Service

‘This is a long overdue book on the evolution of the US doctrine of patent misuse and its relationship with antitrust law. It is well written and well researched. . . Lim’s excellent book not only throws much light on the detailed development of the patent misuse doctrine in the US but also makes a valuable contribution to the overall field of the interface between intellectual property rights and competition law.’
– Queen Mary Journal of Intellectual Property

‘A thorough and fruitful study on patent misuse. . . The piece mainly gives a rich account of equity doctrines that are currently applied in US patent law. It canvasses not only patent misuse but also further doctrines, such as ‘‘inequitable conduct’’ or ‘‘unclean hands’’. Due to substantial empirical groundwork, the book provides its reader with a very useful orientation on the often inhomogeneous application of the misuse concept. The unconventional interview method achieves to show patent misuse as law on the move, as an ‘‘amorphous and subjective concept that will be applied liberally, then challenged and conﬁned to await the next cycle of judicial zeitgeist.’’ This realization along with Lim’s other insights will indeed provide a copious ‘‘resource for all those who are engaged in deciding what patent misuse means and should mean today’.
– Peter Picht, Max Planck Institute for Innovation and Competition

Bioinformatics, Medical Informatics and the Law