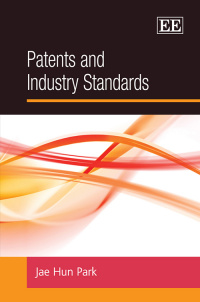 More Information
Critical Acclaim
Contents
More Information
This insightful book reviews the inherent conflict between patent rights and industry standards and through analysis of both US and European case law proposes measures to improve current systems and foster greater innovation.

Jae Hun Park searches for the appropriate balance between the rights of patent owners and the need for industry standards within the scope of patent law. He considers the current solutions provided by legal systems and using cost–benefit analysis evaluates, from a legal and economic perspective, whether patent systems can be improved. Jae Hun Park proposes reform to the patent system that would introduce a ‘dynamic liability rule regime’, rather than ‘property rules’. The ‘dynamic liability rule regime’ adopts property rules at the stage when there are still competing standards, and liability rules at the stage when there are no competing standards. This would, he argues, resolve the conflict between patents and standards and mitigate the patent hold-up problem.

This is a must-read book for scholars interested in technology patents, innovation and competition law and policy, as well as those individuals working in standard setting organisations. It will also be of great interest to patent offices, patent attorneys and competition lawyers.
Critical Acclaim
‘Dr Jae Park is to be congratulated for turning our attention to this difficult and underexplored area. His work focuses on standards and patents but goes well beyond an initial first analysis. He examines the finer points of both sets of rules in order to find out exactly where the problem lies and he then looks at the existing mechanisms that could provide a solution. Many of these have their roots in the area of competition law, but his thorough analysis shows that competition law in its current form and with its current limitations is not the perfect tool to address the problems that arise when patented technology becomes the object of standardisation. This leads Dr Park to develop his own solution for the problem at hand: a solution which he finds in the dynamic liability rules regime. This book really breaks new ground and provides a first and thorough analysis of this rarely addressed but increasingly important area.’
– From the foreword by Paul L.C. Torremans, University of Nottingham, UK
Contents
Contents: Foreword by Paul L.C. Torremans 1. Introduction 2. Industry Standards 3. Patents and Standards in the US 4. Patents and Standards in the EU 5. Patent Laws and Standards 6. Costs and Benefits of Patent Systems 7. Alternative Solutions and a Suggested Solution 8. Conclusion References Index
Add to Wish List
eBook for individuals
978 1 84980 548 3
From £25.00
Click here for options
eBook for library purchase
978 1 84980 548 3
View sample chapter and check access on: