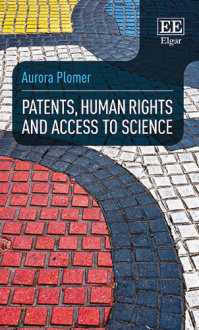 9781783475926 Edward Elgar Publishing
Aurora Plomer, Law School, University of Bristol, UK
Publication Date: 2015 ISBN: 978 1 78347 592 6 Extent: 200 pp
The new millennium has been described as ‘the century of biology’, but scientific progress and access to medicines has been marred by global disputes over ownership of the science by universities and private companies. This book examines the challenges posed by the modern patent system to the right of everyone to access the benefits of science in international law.

More Information
Critical Acclaim
Contents
More Information
The new millennium has been described as ‘the century of biology’, but scientific progress and access to medicines has been marred by global disputes over ownership of the science by universities and private companies. This book examines the challenges posed by the modern patent system to the right of everyone to access the benefits of science in international law.

Aurora Plomer retraces the genesis and evolution of the key Articles in the UN system (Article 27 UDHR and Article 15 ICESCR). She combines the historiography of these Articles with a novel perspective on the moral foundations of rights of access to science to draw out implications for today’s controversies on patents in the life-sciences. The analysis suggests that access to science as a fundamental right requires both freedom from political and religious interference and the existence of enabling research institutions and educational facilities which promote the flow of knowledge through transparent and open structures. From this perspective, the global patent system is shown to fail spectacularly when it comes to the human rights ideal of universal access to science. The book concludes that a fundamental restructuring of patent institutions is required, in which democratic oversight of patent policies would ensure meaningful realization of the right of everyone to access the benefits of science.

Students and scholars of international law, particularly those focusing on intellectual property and human rights, will find this book to be of considerable interest. It will also be of use to practitioners in the field.

Critical Acclaim
‘Aurora Plomer explores international human rights, and its relevance to battles over intellectual property and science. Her work highlights the need for the benefits of scientific research to be fairly and equitably shared. Her work is an important original contribution to the literature on intellectual property, human rights, and the sociology of science.’
– Matthew Rimmer, Queensland University of Technology, Australia

‘This remarkable book highlights and analyzes the inherent tensions and complementarities of patents with access to science, as materialized in the most prominent international human rights agreements. A must-read for anyone interested in one of the most crucial and debated questions of intellectual property, examined here from the perspective of its fascinating but complex interactions with human rights.’
– Christophe Geiger, University of Strasbourg, France

‘In sum, Patents, Human Rights and Access to Science is an excellent book that scholars interested in the interplay of intellectual property, science and human rights should add to their reading list. Plomer is manifestly passionate about instituting significant reform in the global patent system to facilitate democratic oversight of patent policies and their compliance with human rights, and to ensure meaningful realisation of the right of everyone to access the benefits of science. Her argument is compelling. Let us hope that the international agencies created to defend universal human rights, as well committed individuals, patent offices, courts, non-governmental organisations and companies across the globe, work together to heed the sage advice offered in this book.’
– SCRIPT-ed – the Online Law and Technology Journal

‘This book offers an innovative and insightful reflection on the interplay between fundamental human rights and the intellectual property regime. It builds on Amartya Sen's theory of human capabilities in offering a fresh analysis of the the tension between the rights of inventors and the public interest in access to the benefits of science. The timeliness of this contribution is underscored by the growing scope of 'patentability' over genetic material and other life forms permitted by patent offices and superior courts in the United States and in Europe, as well as the entrenchment of corporate power at the expense of basic health needs through the extension and enforcement of intellectual property rights over essential medicines. Professor Plomer's argument for greater consideration of the public dimension is secured by her impressive archival study of the drafting history of the Article 27 Universal Declaration on Human Rights and Article 15 of the International Covenant on Economic, Social and Cultural Rights.’
– John Harrington, Cardiff University, UK

‘The relationship between patents, human rights and science raises fundamental questions for innovation and for access to the benefits of scientific endeavour. Yet the complexities of the underlying science and legal environment in which it operates cannot be underestimated. Aurora Plomer deftly navigates this terrain with great clarity and skill. The resulting book is timely, accessible and a thorough scholarly work that demystifies and throws new light on the interface between science and the law.’
– Duncan Matthews, Queen Mary University of London, UK

‘We are indebted, indeed, to Aurora Plomer for writing this book and for saying out loud and clearly the most important thing that needs to be said: we might be where we are, and it might not be the ideal place to be, but we should all – patent lawyers, scientists and citizens – take human rights seriously.’
– Law, Innovation and Technology
Contents
Contents: 1. Patents, Profits and the Public 2. The Moral Architecture of Human Rights and Rights of Access to Science 3. The Human Rights Paradox: Intellectual Property Rights and Rights of Access to Science 4. From Moral Ideals to Legal Obligations: The Genesis of Article 15 ICESCR 5. The UN’s Official Thinking on Article 15(1)(c) 6. UNESCO : Biotechnology, Bioethics and the Rights to Share in the Benefits of Science 7. Conclusion Index