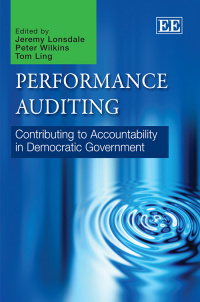 Contributing to Accountability in Democratic Government

More Information
Critical Acclaim
Contributors
Contents
More Information
This state-of-the-art book examines the development of performance audit, drawing on the experience in a number of different countries, including the United Kingdom, the United States, Australia, the Netherlands, and Belgium.

The expert contributors identify the trajectory of performance audit, examine how it is conducted and consider what it is contributing to effective government. They conclude that, in the face of new challenges, performance auditors should focus both on their core responsibilities to ensure accountability, and continue to develop more insightful and sophisticated approaches to enable them to assess the growing complexity of the delivery of public services. By doing so, they can continue to play a valuable role in democratic accountability.

Providing an up-to-date overview and discussion of performance audit, this highly topical book will appeal to all those working within audit, academics working in the fields of public management and public administration, as well practitioners in and close to state audit institutions. Members of Parliament, evaluators, internal auditors, researchers, policy analysts and consultants will also find this book invaluable.
Critical Acclaim
‘It is time, 15 years on from the coining of the “Audit Explosion”, to re-appraise the growth of new forms of auditing. As we move into what might be called “Auditing in Austerity” this book gives us that overview. An extremely well-informed team of authors has been assembled to deliver a comparative analysis that successfully mixes “insider” and “outsider” perspectives. This should be required reading, not just for auditors and their academic hangers-on, but for the wider audience of those interested in contemporary developments in democratic accountability and policymaking.’
– Christopher Pollitt, Catholic University of Leuven, Belgium

‘This book fills an important gap in the market. At a time when governments around the world face the largest deficits in decades, there is a strong need to reduce public expenditures whilst ensuring greater value for money from public services. This book addresses these concerns and many more. Each of the chapter authors is a senior practitioner and/or an academic who specialises in performance auditing and accountability in modern complex democracies. They explore the nature of the concepts which underlie current practice; set out a variety of institutional structures and processes, and identify the limits of both theory and practice. These make this a book of considerable significance and one which makes an important contribution to our understanding of the democratic process. This is not a narrowly-focused book only of interest to those who specialise in performance auditing. Given the richness of its analysis and the fine-grained understanding of institutions and processes, it has much to say to students of public administration, management and policy analysis. I am confident that this will rapidly become the standard reference for those who are interested in performance auditing.’
– Peter M. Jackson AcSS, University of Leicester, UK

‘What a good read. Insightful and challenging. It is likely to incite a lot of discussion on the wide-ranging views from the very well-informed and qualified contributors, not least from those who actually have to implement the findings and recommendations of performance audit reports. The focus is rightly on accountability for performance not only in achieving government program objectives in an economic, efficient and effective manner, but also on the audit institutions themselves. It should be welcomed by the public sector and particularly by the parliamentary institutions concerned with achieving accountability for government performance.’
– Pat Barrett AO, Australian National University and former Australian Auditor-General (1995–2005)

‘This book is a much welcome tonic for public administration. It is one of the few books that explicitly focus on how audit institutions carry out their performance auditing responsibilities. While auditors will likely read this, the authors have geared the book to a broader readership, including public managers who are often the subject of performance audits.’
– From the foreword by Paul Posner, George Mason University, US

PART I: THE CONDUCT OF PERFORMANCE AUDIT
3. Selection of Topics
Vital Put and Rudi Turksema

4. Norms Used: Some Strategic Considerations from The Netherlands and the UK
Vital Put

5. The Right Tools for the Job? Methods, Choice and Context
Jeremy Lonsdale

7. Forming Judgements: How do VFM Audit Teams Know What They Know?
Justin Keen

PART II: THE CONTRIBUTION OF PERFORMANCE AUDIT
9. The Impact of Performance Audits: A Review of the Existing Evidence
Eddy Van Loocke and Vital Put

11. On the Effects, Lack of Effects and Perverse Effects of Performance Audit
Frans L. Leeuw

13. Learning in an Accountability Setting
Jeremy Lonsdale and Elena Bechberger

14. Responsiveness in Performance Auditing: Towards the Best of Both Worlds
Peter van der Knaap