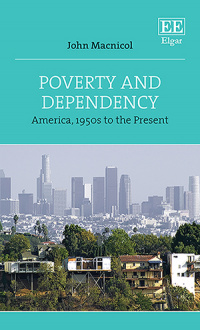 9781789907292 Edward Elgar Publishing
John Macnicol, Visiting Professor of Social Policy, London School of Economics and Political Science, UK
Publication Date: 2020 ISBN: 978 1 78990 729 2 Extent: 192 pp
This incisive book addresses the history of poverty in the US, addressing how those in need have been understood and administered during the last 70 years. Launching a multi-faceted investigation into the history of US government attitudes to welfare, John Macnicol identifies the key features of historic and contemporary discussions on poverty in the US and the dynamic changes in American attitudes to its poorest constituents.

More Information
Critical Acclaim
Contents
More Information
This incisive book addresses the history of poverty in the US, investigating how those in need have been understood and governed during the last 70 years. John Macnicol launches a multi-faceted analysis of government attitudes to welfare and ‘dependency’, highlighting the impact on the poorest groups of American society.

Poverty in the US is explored through the eyes of prominent liberals, including Gunnar Myrdal, John Kenneth Galbraith and Michael Harrington, in times of economic growth and recession, from the New Deal to the rise of neoliberalism. Macnicol also examines the career and ascendancy of the leading conservative, Charles Murray, and his contention that America suffered a growing ‘underclass’ largely created by over-generous welfare. Through analysis of the mechanisms and output of leading conservative think-tanks in the late twentieth century, the author identifies the key features of historic and contemporary discussions related to poverty and dependency in the US and the dynamic changes of American attitudes to its poorest constituents.

A timely discussion for a period of economic cynicism, this book is crucial reading for scholars of social policy, particularly those examining the history of impoverishment and debates relating to poverty and dependency. Students of social policy, sociology and economics will also benefit from its insights into historic US government attitudes and reactions to poverty.

Critical Acclaim
‘What was the underclass debate in the United States, and what impact did it have on social policy there? By exploring how the debate evolved in the second half of the twentieth-century, Macnicol presents a strong argument for the role of ideas about poverty and dependency in the rise of neoliberalism in the United States, and a valuable critique of the ideas of the leading figures of the movement. The book's greatest strength lies in the breadth of material covered, and the engagement with the key arguments of relevant authors, both conservatives and liberals.’
– Mickey Conn, Social Policy & Administration


‘Recommended. Students of political thought will find Macnicol's interpretations thought provoking.
– R.S. Rycroft, CHOICE
Contents
Contents: 1. The American Welfare State from the 1930s to the 1960s 2. The 1960s 3. The socio-economic background in the 1970s and 1980s 4. The conservative revival 5. Charles Murray and the ‘underclass’ 6. The modern ‘underclass’ debate