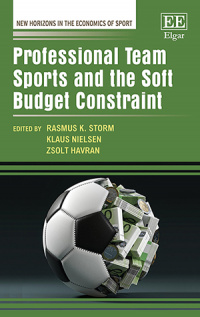 More Information
Critical Acclaim
Contributors
Contents
More Information
Exploring why professional team sport clubs are almost always able to survive despite financial mismanagement, inflated player salaries and persistent deficits, this book provides new evidence on how to explain this phenomenon. It looks at the context in which many clubs operate – the soft budget constraint – and how the clubs in this respect resemble state-owned enterprises in socialist countries or big banks in financial crises.

Chapters discuss the challenge of hardening the budget constraint, including UEFA’s Financial Fair Play regulation. They include new data about the soft budget constraint phenomenon, including evidence from Central and Eastern Europe. Leading scholars in the field develop the theoretical approach to the topic using institutional theory, dialogue with critics and discussions on the merits and limits of soft budgets. The book also investigates key case studies of bailouts and liquidation of professional sports teams.

This will be an invigorating read for scholars and students of sports economics and sports management. It will also be helpful to managers and directors in professional sports clubs looking for a better understanding of the soft budget constraint.
Critical Acclaim
‘A new strand of literature has developed which applies the soft budget constraints approach to the problems encountered in the European sports industry. Some of the most important authors of this new field, but also a prominent critic, have contributed to this volume, which is a highly recommended read for sports economists and sports managers.’
– Egon Franck, University of Zurich, Switzerland

‘The concept of the soft budget constraint was first developed by the Hungarian economist Janos Kornai in relation to the planned economies of Eastern Europe. More recently, the concept has been applied to professional team sports in Western as well as Eastern Europe, based on the notion that clubs frequently become insolvent and have to be bailed out by external benefactors. This is consistent with win maximisation models with a tendency to overinvest in players (see in particular the chapters by Wladimir Andreff and Stefan Szymanski). Despite the fact that the book is almost wholly devoted to professional football it is a very useful starting point for those sports economists and others wishing to become familiar with the concept.’
– Peter J. Sloane, Swansea University, UK and IZA, Germany