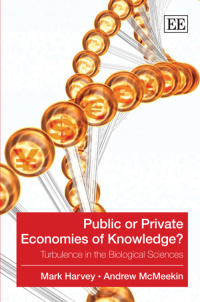 Public or Private Economies of Knowledge?

Turbulence in the Biological Sciences

More Information
Critical Acclaim
Contents
More Information
The ‘great divide’ between public and private knowledge in capitalism is an unstable frontier at the core of contemporary economic transformations. Based on research in the USA, Europe and Brazil into the cutting edge of biological science and technology, this book presents a novel framework for understanding this historically shifting fault-line.

Over the last quarter of a century, major controversies have accompanied the dramatic developments in biological science and technology. At critical points, leading commercial companies were poised to take ownership over the human genome and much new post-genomic knowledge. The software tools for analysing the deluge of data also appeared, as did expanding new markets for private enterprise. At the same time, huge new public programmes of biological research were accompanied by radical innovation in the institutions and organisation of public knowledge. Would private marketable knowledge dominate over the new public domain or vice versa? Surprisingly, the dynamism and expansion of the public domain, and new forms of differentiation and interdependence between public and private economies of knowledge, now characterise the landscape. This book presents an analytical framework for understanding the shifting ‘great divide’ in capitalist economies of knowledge.

Public or Private Economies of Knowledge? will appeal to those with an interest in innovation studies, economic sociology and economic theory.
Critical Acclaim
‘This book embraces a fundamental issue for the modern information economy, namely the creation, negotiation and institutionalization of private and public knowledge. The authors argue that as new biological knowledge develops, the actors must help create and negotiate the boundaries of what can be considered private and public knowledge. By using an Instituted Economic Process approach, the authors come to grips with these dynamics of the economics of knowledge. This approach therefore helps us analyze who is involved, who benefits, and why conflicts occur within an innovation-driven economy. The authors provide very interesting empirical material, as well, because they develop their analytical points, through well-written and thick descriptions of cases from biodata, bioinformatic, and a case of gene sequencing. Hence, this book makes interesting conceptual and empirical contributions, to our understanding of modern biological sciences in the economy.’
– Maureen McKelvey, Chalmers University of Technology, Sweden

‘It once was believed that scientific knowledge was public and technological knowledge was proprietary, and this was the way it should be. However, recent developments, particularly in biology, have unsettled this belief. This superb book examines what determines whether a body of knowledge is public or private. The consideration of the theoretical issues is thorough and thoughtful. The study of how things have played out in various fields of biology, and why, is smashing. What the authors have to say is important and fascinating, and makes for a great read.’
– Richard R. Nelson, Columbia University, US

Contents
Contents: 1. Making Knowledge Public and Private 2. The Data Explosion: The Emergence of a New Form of Bio-knowledge 3. Tools of the Trade – Trade of the Tools 4. Collaboration and Competition: The Dynamics of a Genome Race 5. Evolving Economies of Knowledge Bibliography Index
Add to Wish List
eBook for individuals
978 1 84720 869 9
From £29.60
Click here for options
eBook for library purchase
978 1 84720 869 9
View sample chapter and check access on:

A Modern Guide to Knowledge

Elgar Encyclopedia on the Economics of Knowledge and Innovation