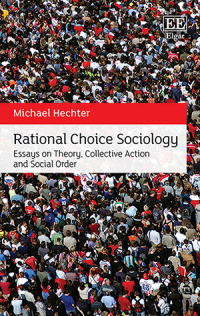 More Information
Critical Acclaim
Contents
More Information
Whereas rational choice theory has enjoyed considerable success in economics and political science, due to its emphasis on individual behavior sociologists have long doubted its capacity to account for non-market social outcomes. Whereas they have conceded that rational choice theory may be an appropriate tool to understand strictly economic phenomena – that is, the kinds of social interactions that occur in the gesellschaft – many sociologists have contended that the theory is wholly unsuitable for the analysis of the kinds of social interactions in the gemeinschaft – such as those occurring in families, in social groups of all kinds, and in society at large. In a variety of non-technical chapters, Rational Choice Sociology shows that a sociological version of rational choice theory indeed can make valuable contributions to the analysis of a wide variety of non-market outcomes, including those concerning social norms, family dynamics, crime, rebellion, state formation and social order.
Critical Acclaim
‘Throughout his long career, Michael Hechter has been one of the discipline’s most creative and exacting theorists. This volume pulls together some of his most important publications, showing an extraordinary range of contributions to a variety of substantive problems – from the foundations of social order, to the formation of group solidarity, civil war, rebellion, state structures, and the foundations of class versus identity politics.’
– Andrew G. Walder, Stanford University, US

‘This is one of the finest collections of papers in sociological theory. ‘Michael Hechters work on sociological rational choice theory captivates with its creative application to a multitude of different topics among them the key questions of solidarity, social change, and social order. Hechter shows that sociological rational choice theory is much more than a utility maximization device. By adding “value” to rational choice he elegantly comes to innovative and often surprising explanations of social phenomena. Dealing with the work of this most eminent theorist is a must for any scholar interested in sociological theory and its applications.’
– Andreas Diekmann, ETH Zurich, Switzerland and University of Leipzig, Germany

‘Michael Hechter has pioneered the application of rational choice theory to sociology. The range of his contributions – and the extent to which he has refined the theory – is well represented in this collection of seminal essays on key sociological topics, such as demography, nationalism, historical sociology, collective action, state formation and social norms. If the discipline has now acquired firm analytical foundations, it is to a great extent thanks to Hechter’s scholarship. No student of sociology can afford to ignore such an extraordinary body of work.’
– Federico Varese, University of Oxford, UK

‘Michael Hechter is one of the major proponents of rational actor theory in the social sciences. The book is a useful collection of some of the major articles that cover important issues that are of general interest – in particular collective action and social order. The book shows the wide range of application of the theory and, hopefully, will contribute to further increase its recognition as an important tool to explain social phenomena.’
– Karl-Dieter Opp, University of Leipzig, Germany and University of Washington, US

‘An early pioneer of sociological rational choice, Michael Hechter has made seminal contributions to rational choice theory over a career spanning nearly 50 years. This book brings those contributions together in a single volume. Although the chapters address a range of substantive topics – fertility decisions, the value of children, collective action, the genesis of mutiny, and state formation – at its core is a deep concern with a fundamental question for social science: How is social order, solidarity, and control possible in human societies? This book provides a compelling answer from a rational choice perspective.’
– Ross L. Matsueda, University of Washington, US

Advanced Introduction to Law and Psychology