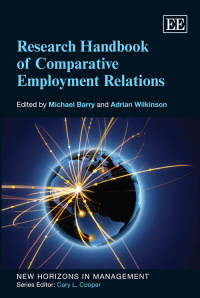 9781847208897 Edward Elgar Publishing
New Horizons in Management series
Edited by Michael Barry, Professor, Department of Employment Relations and Human Resources, Griffith University and Adrian Wilkinson, Professor of Employment Relations and Human Resource Management, Griffith University, Australia and University of Sheffield, UK
Publication Date: 2011 ISBN: 978 1 84720 889 7 Extent: 480 pp
The Research Handbook of Comparative Employment Relations is an essential resource for those seeking to understand contemporary developments in the world of work, and the way in which employment relations systems are evolving around the world.

Research Handbook on Corporate Board Decision-Making