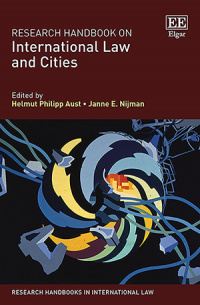 9781035309948 Edward Elgar Publishing
Research Handbooks in International Law series
Edited by Helmut Philipp Aust, Professor of Law, Freie Universität Berlin, Germany and Co-Chair of the ILA Study Group on ‘The Role of Cities in International Law’, Janne E. Nijman, Professor of History and Theory of International Law, University of Amsterdam, the Netherlands and Miha Marcenko, Assistant Editor
Publication Date: 2022 ISBN: 978 1 03530 994 8 Extent: 512 pp
This groundbreaking Research Handbook provides a comprehensive analysis and assessment of the impact of international law on cities. It sheds light on the growing global role of cities and makes the case for a renewed understanding of international law in the light of the urban turn.
Winner of the ESIL Collaborative Book Prize 2022

Combining doctrinal work and analysis of international practice with critical historical and theoretical contributions, this Research Handbook will be a must-have reference book for researchers and students in the field of international law as well as other disciplines, including human geography, urban studies, sociology and political science.
Critical Acclaim
Awarded the 2022 ESIL Collaborative Book Prize

'Research Handbooks tend to be just that – a book for reading selected contents one is interested in. Not this Handbook – it is fascinating from the beginning to end. Research Handbook of International Law and Cities, edited by Helmut Philip Aust and Janne E. Nijman, is an innovative collaborative work because it draws light at the growing importance of cities in international legal frameworks. Traditionally, cities have had relatively little to do with international law as the law of nations was constructed around the nation state and its sovereignty. The book invites us to rethink this proposition as it demonstrates how cities have become active in areas traditionally thought to be relating to international law. It thus raises awareness of a blind spot in international law, filling a research gap – adding more actors to the multiplicity of actors relevant in international law. […]
Overall, the book impresses with the range of its perspectives, it accommodates 35 different chapters from a group of scholars who can be called diverse and also illustrate the value of best edited books which are together stronger and richer than each constitutive part would be alone. In this sense, the volume is thought-provoking in the best sense of the word. It does push the reader to think about international law differently than before since the underlying phenomena and questions of the book are so interesting and the role of cities is convincingly and holistically set out.'
– Jury’s decision (partial)

‘This is an essential read for all of those studying or working at the intersection of International Relations and urban policy. The volume is a treasure trove of legal and international nuance critical to unpack the challenges that confront the internationalization of cities in the multilateral arena.’
– Michele Acuto, International Affairs

‘I would commend this book to all lawyers practising in the field of public international law and to students of the subject. It is a useful and innovating reference book and contributes to a better understanding of the role of cities in various fields of international law.’
– Stephen D Sutton, The Law Society Gazette

‘Aust and Nijman’s Research Handbook on International Law and Cities captures the complexity, and the controversy, of the relationship between cities and international law in all its splendour. This is a skilfully designed and executed – and coherent – work from the leading legal scholars in the field. The reader is led through the history, structure and many of the current issues in what is an increasingly well-established field, both academically and in practice. There will be many more thematic avenues to explore but the principles and the path are set out here. This book will become a dear friend for many historians, political scientists and lawyers, to name but a few.’
– Robert Lewis-Lettington, UN-Habitat

1 The emerging roles of cities in international law – introductory remarks
on practice, scholarship and the Handbook 1
Helmut Philipp Aust and Janne E. Nijman