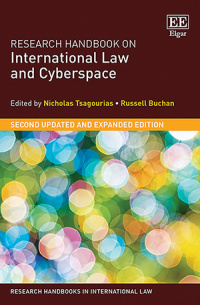 More Information
Critical Acclaim
Contributors
Contents
More Information
This revised and expanded edition of the Research Handbook on International Law and Cyberspace brings together leading scholars and practitioners to examine how international legal rules, concepts and principles apply to cyberspace and the activities occurring within it. In doing so, contributors highlight the difficulties in applying international law to cyberspace, assess the regulatory efficacy of these rules and, where necessary, suggest adjustments and revisions.

More specifically, contributors explore the application of general concepts and principles to cyberspace such as those of sovereignty, power, norms, non-intervention, jurisdiction, State responsibility, human rights, individual criminal responsibility and international investment law and arbitration. Contributors also examine how international law applies to cyber terrorism, cyber espionage, cyber crime, cyber attacks and cyber war as well as the meaning of cyber operations, cyber deterrence and the ethics of cyber operations. In addition, contributors consider how international and regional institutions such as the United Nations, the European Union, NATO and Asia-Pacific institutions and States such as China and Russia approach cyber security and regulation.

This Research Handbook is an essential resource for scholars of international law, international relations and public and private law as well as for legal practitioners and policymakers.

Critical Acclaim
‘Tsagourias and Buchan have successfully brought together some of the world's best legal thinkers on cyber issues to address the domain's most difficult current questions. For anyone looking to understand the application of international law to cyber operations, including the views of major actors such as China, and Russia, this second edition of the Research Handbook provides an incredibly useful one-stop source. A true must-read for anyone involved in cyber operations.’
– Eric Talbot Jensen, Brigham Young University, US