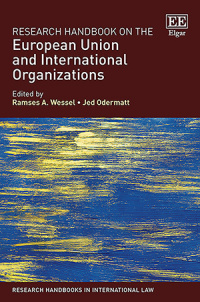 Research Handbook on the European Union and International Organizations

9781786438928 Edward Elgar Publishing
Research Handbooks in International Law series
Edited by Ramses A. Wessel, University of Groningen, the Netherlands and Jed Odermatt, City, University of London, UK
Publication Date: 2019 ISBN: 978 1 78643 892 8 Extent: 720 pp
Over the years, the European Union has developed relationships with other international institutions, mainly as a result of its increasingly active role as a global actor and the transfer of competences from the Member States to the EU. This book presents a comprehensive and critical assessment of the EU’s engagement with other international institutions, examining both the EU’s representation and cooperation as well as the influence of these bodies on the development of EU law and policy.

More Information
Critical Acclaim
Contributors
Contents
More Information
The European Union has established relationships with other international organizations and institutions, mainly as a result of its increasingly active role as a global actor and the transfer of competences from the Member States to the EU. Containing chapters by leading scholars, this Research Handbook presents a comprehensive and critical assessment of these relationships, examining both the EU’s representation and cooperation as well as the influence of these external bodies on the development of EU law and policy.

Insightful and analytical, the Research Handbook explores the interaction of the EU with both formal and informal international institutions as it seeks to become more visible and active within these. The many challenges associated with the limits set by the EU and by international law and politics in relation to EU participation and the ‘state-centred’ international legal system are assessed.

This unique Research Handbook will be a key resource for scholars and students of international and European law and political science, providing a unique overview of the less well-known international organizations in addition to the large institutions. The examination of the development of law and policy will also be of interest to the practitioners of these organizations and those at national ministries.

Critical Acclaim
‘This Research Handbook offers an in-depth survey about the European Union’s status and activity in over 20 international organisations and bodies. It covers all relevant actors in the UN family, assembles the most important economic bodies, and contains insights about lesser researched entities in the fields of agriculture and fisheries, criminal justice or security. Highly interesting introductory chapters and conclusions are flanking the case studies. An excellent compilation written by leading academics and experienced practitioners!’
– Frank Hoffmeister, European Commission, Belgium

‘This Research Handbook, with its impressive range of contributors, is a very welcome addition to the literature for scholars and students of the EU as a regional and global actor. It is the most comprehensive work that I have seen on the subject: alongside chapters addressing horizontal themes it covers the EU’s relations with a wide array of international organisations, from UN agencies to the WTO and WIPO, from NATO to regional organisations in Europe, Africa, Asia and Latin America. Apart from the intrinsic interest of the mass of detailed information about how the EU engages with specific organisations, bringing this material together brings into sharper focus the questions that EU engagement with international organisations raises for both international and EU law.’
– Marise Cremona, European University Institute, Italy

‘This remarkable book provides for the first time a comprehensive account of the European Union's broad ranging interactions with and contributions to the work of other international organisations. It will be of great benefit and necessary reading not only for international civil servants and government officials, but also for those scholars and practitioners interested in international organisations and their increasing exercise of sovereign powers.’
– Professor Dan Sarooshi QC, Essex Court Chambers and University of Oxford, UK

‘This innovative collection of essays offers a uniquely comprehensive exploration of the way in which the EU engages with other international organizations and bodies. While both EU law and international law perspectives are examined, this book goes beyond mere legal analysis to address political and practical issues the EU encounters on the internal and the external fronts. It forms a major contribution to the literature on the relationship between the EU legal order and public international law and on the EU’s role in international relations more generally.’
– Geert De Baere, General Court of the EU and KU Leuven, Belgium

‘As the European Union assumes an ever more prominent role as a global actor, there is a growing need to understand the ways and means of the EU’s engagement with other international institutions. This volume, with contributions from renowned experts and scholars, is the first comprehensive study to address the various relationships in that category. It is the essential companion for practitioners and scholars in the fields of European law and international organization.’
– Catherine Brölmann, University of Amsterdam, the Netherlands

PART I DEVELOPMENTS IN THE INTERACTION BETWEEN THE EU AND OTHER INTERNATIONAL INSTITUTIONS
1. The European Union’s Engagement with Other International Institutions Emerging Questions of EU and International Law
Ramses A. Wessel and Jed Odermatt

2. The European Union in the Law of International Organizations: Misfit or Model?
Jan Klabbers

3. The Changing International Cooperation Network of the EU: The Inclusion of Informal (Regulatory) Bodies
Jan Wouters and Alex Andrione-Moylan

5. Food and Agricultural Organisation (FAO) and Codex Alimentarius Commission: The Impact of the Right to Food and Food Standards on EU Food Law
Bernd van der Meulen and Bart Wernaart

6. International Labour Organisation (ILO): A Dynamic and Result–oriented Cooperation with the EU and its Member States
Rudi Delarue and Evelyne Pichot

7. World Health Organization (WHO) and other Global Health Bodies: The EU Voice in a Fragmented Global Health Landscape
Thea Emmerling

23. Agriculture: The EU in the OIV and Other International Agricultural Commodity Bodies
Thomas Ramopoulos

24. Law of the Sea Framework: Is EU Engagement a sine qua non for Influence?
Claudia Cinelli

PART IV THE EU AND OTHER REGIONAL COOPERATION FRAMEWORKS
26. Council of Europe: Co-operation in the Field of Human Rights, Democracy and the Rule of Law
Rick Lawson

28. The EU and its Neighbourhood: A Patchwork of Regional Strategies and Institutions from the Mediterranean to the Arctic
Erwan Lannon and Peter Van Elsuwege

29. The EU’s Engagement with the Asia Pacific: An Ambivalent Relationship
Chien-Huei Wu

30. The EU’s Engagement with Africa: The Joint Africa-EU Strategy as a Turning Point
Anna-Luise Chané and Magnus Killander

PART V ASSESSING EU INTERACTION WITH INTERNATIONAL INSTITUTIONS
32. The Political Impact of the EU’s Interaction with International Institutions: Towards a Two-Way Street – Both Inside-Out and Outside-In Perspectives
Knud Erik Jørgensen and Katie Laatikainen

33. The Legal Effects of the EU’s Interaction with other International Institutions in Law: ‘Inwards’, ‘Outwards’, and the ‘In-between’
Elaine Fahey

34. The Challenges of Engaging with International Institutions: The EU and Multilateralism under Strain
Jed Odermatt and Ramses A. Wessel