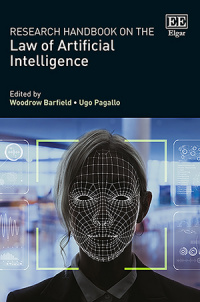 Research Handbook on the Law of Artificial Intelligence

9781786439048 Edward Elgar Publishing
Edited by Woodrow Barfield, has served as professor of engineering and is currently editor of the Virtual Reality journal and is a review editor for Frontiers in Artificial Intelligence and Ugo Pagallo, Professor, Department of Law, University of Turin, Italy
Publication Date: 2018 ISBN: 978 1 78643 904 8 Extent: 736 pp
The field of artificial intelligence (AI) has made tremendous advances in the last two decades, but as smart as AI is now, it is getting smarter and becoming more autonomous. This raises a host of challenges to current legal doctrine, including whether AI/algorithms should count as ‘speech’, whether AI should be regulated under antitrust and criminal law statutes, and whether AI should be considered as an agent under agency law or be held responsible for injuries under tort law. This book contains chapters from US and international law scholars on the role of law in an age of increasingly smart AI, addressing these and other issues that are critical to the evolution of the field.

More Information
Contributors
Contents
More Information
The field of artificial intelligence (AI) has made tremendous advances in the last few decades, but as smart as AI is now, it is getting exponentially smarter and becoming more autonomous in its actions. This raises a host of challenges to current legal doctrine, including whether the output of AI entities should count as ‘speech’, the extent to which AI should be regulated under antitrust and criminal law statutes, and whether AI should be considered an independent agent and responsible for its actions under the law of tort or agency. Containing chapters written by leading U.S., EU, and International law scholars, the Research Handbook presents current law, statutes, and regulations on the role of law in an age of increasingly smart AI, addressing issues of law that are critical to the evolution of AI and its role in society.

To provide a broad coverage of the topic, the Research Handbook draws upon free speech doctrine, criminal law, issues of data protection and privacy, legal rights for increasingly smart AI systems, and a discussion of jurisdiction for AI entities that will not be “content” to stay within the geographical boundaries of any nation state or be tied to a particular physical location. Using numerous examples and case studies, the chapter authors discuss the political and jurisdictional decisions that will have to be made as AI proliferates into society and transforms our government and social institutions. The Research Handbook will also introduce designers of artificially intelligent systems to the legal issues that apply to the make-up and use of AI from the technologies, algorithms, and analytical techniques.

This essential guide to the U.S., EU, and other International law, regulations, and statutes which apply to the emerging field of “law and AI”will be a valuable reference for scholars and students interested in information and intellectual property law, privacy, and data protection as well as to legal theorists and social scientists who write about the future direction and implications of AI. The Research Handbook will also serve as an important reference for legal practitioners in different jurisdictions who may litigate disputes involving AI, and to computer scientists and engineers actively involved in the design and use of the next generation of AI systems.

13. Data Algorithms and Privacy in Surveillance: On Stages, Numbers, and the Human Factor
Arno R. Lodder and Ronald P. Loui

14. The Impact of AI on Criminal Law, and its Twofold Procedures
Ugo Pagallo and Serena Quattrocolo

17. Artificial Intelligence and the Patent System: Can a New Tool Render a Once Patentable Idea Obvious?
William Samore

19. Artificial Intelligence and the Creative Industry: New Challenges for the EU Paradigm for Art and Technology by Autonomous Creation
Madeleine de Cock Buning

21. The Artificially Intelligent Internet of Things and Article 2 of the Uniform Commercial Code
Stacy-Ann Elvy